Fifteen labourers crushed to death by dumper in Surat 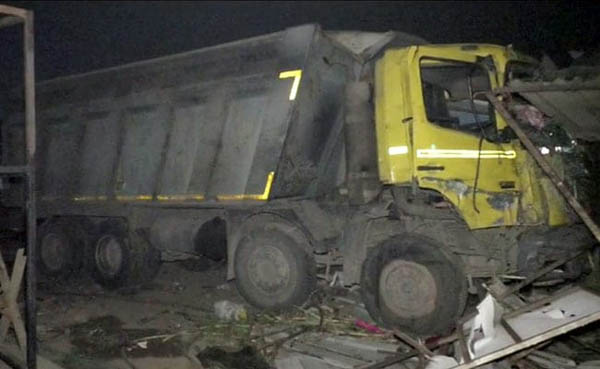 Surat, Jan 19(UNI) At least 15 labourers sleeping on a pavement were crushed to death by a dumper in Kosamba village, around 50 km from here, police said on Tuesday.

The incident took place around midnight last night when the driver lost control of the dumper, after it collided with an oncoming sugar-cane laden tractor-trolley, and ran over the sleeping people.

While 12 of them died on the spot, three succumbed to their injuries in SMIMER Hospital.

The victims, which included women and children, belonged to Banswara district of Rajasthan.

Police has nabbed the cleaner and the driver who was driving under the influence of alcohol.

An investigation into the incident has been launched.

Prime Minister Narendra Modi has condoled the deaths and announced an ex-gratia of Rs 2 lakhs to the kin of the victims and 50,000 each to those injured.

'The loss of lives due to a truck accident in Surat is tragic. My thoughts are with the bereaved families. Praying that the injured recover at the earliest,' the PM tweeted.