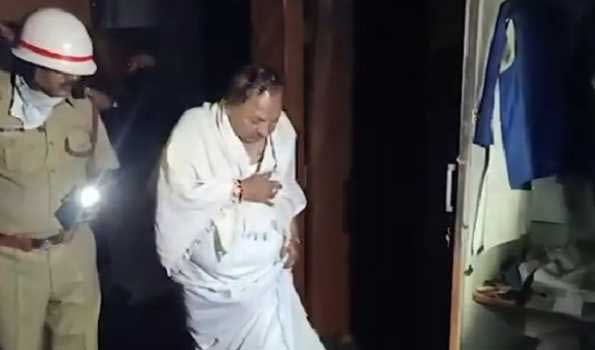 Bengaluru, Karnataka Rural Development and Panchayat Raj Minister K S Eshwarappa and wife escaped unhurt in a major fire broke out at their official residence on Kumarakrupa South in Bengaluru on Monday night.The fire and emergency services personnel said that inferno occurred due to short-circuit. The electrical wiring, furniture and wardrobe at the bungalow were reduced to ashes in less than a few minutes, police said on Tuesday.According to the police, initially sparks were noticed in the air-conditioner fitted in the bed-room of the minister. When the AC was turned on, the sparks flared up into a major fire engulfing the whole room. The minister reportedly alerted his son-in-law Santosh who in turn informed the Fire and Emergency Services. However, by then, the entire room was completely gutted.