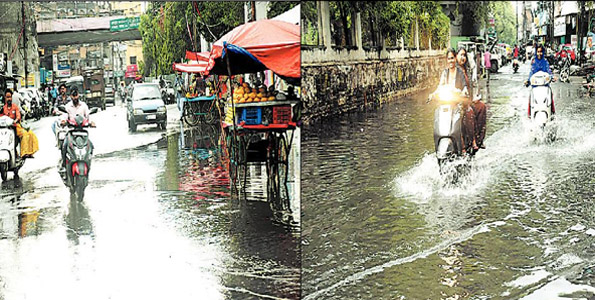 Bhopal: Heavy rain lashed Bhopal on Monday putting Bhopal Municipal Corporation (BMC) on toes. The city received 2.5 cm of rainfall in just one hour on Monday afternoon. The weatherman said the monsoon has made entry in Bhopal and the city was lashed by the first heavy shower of monsoon.
In the state capital, rain provided instant relief from humidity though low lying areas were flooded. Electricity cuts hit TT Nagar, MP Nagar, Polytechnic College, Jahangirabad, Ashoka Garden among other areas for hours when it rained. The electricity distribution company offices were flooded with complaints of load shedding as power supply was disrupted due to damaged electric wires.As per call centre of Bhopal Municipal Corporation (BMC), trees fell in 99-quarters, Mata Mandir and Rahul Nagar. Rain water gushed in Krishna Nagar (Barkheda Pathani) ward no 56. Similarly, rain water entered the Housing Board colony, Koh-e-Fiza, Pushpa Nagar, Bagh Umrao Dulha and other low-lying areas.
The BMC teams were sent to siphon off the water from houses and basements of many commercial complexes. At many places, traders drained out rain water.

Commuters face hardship
Commuters were spotted dragging two wheelers and applying kicks as their vehicles broke down while riding through heavily water logged roads. Prominent roads and rotaries where water logging was noticed included Jyoti Talkies (near Board Office Square), Banganga, Hamidia Road, Nadra Bus Stand, Central Library.
Call centres were flooded with complaints. Most complaints were of choked drains, which carried filth in houses and on roads in congested areas of the Walled City. Choked drains created flood-like situations in many colonies. Complaints were also for water logging in basements. BMC teams were sent for rescue operations. BMC teams sent to clear the choked drains in many colonies to clear the rain water.

Water was also flooded in the street number-3 of Kainchi Chola in the capital. Due to the drain water coming on the road, it was difficult for the passers-by to get out. Lower settlements including Shivnagar, Kolar in Karond were also flooded. The first heavy rain of the season also exposed all the claims of the Municipal Corporation.
The Sheopur-Shivpuri highway remained closed from 6 pm to 10 pm on Sunday due to the overflowing of the Seep river.

Stormy entry of monsoon likely in Indore
After 3 o'clock in the afternoon, dark clouds gathered in Bhopal and heavy rain started. There will also be a stormy entry of monsoon in Indore. The wall of the drain in Bhopal's Bairagarh collapsed due to heavy rain in the afternoon. In the accident, two laborers working in the multi on the banks of the drain were buried. Police and administration are involved in relief and rescue work. As of now, the identity of the people trapped under the rubble is yet to be ascertained. The accident happened behind the old Sindhu Talkies in Bairagarh. Due to frequent rains, relief and rescue operations are facing difficulties.

Couple washed away in Sheopur
Earlier on Sunday evening, due to heavy rains, rivers and streams in Sheopur were overflowing. Late in the night, the couple got washed away in the rainy river in Avada police station area. Ramswaroop Adivasi of Kerka village of Kailor Panchayat and his wife were returning from forest at 9 pm. Both got washed away while crossing the rainy river. Ramswaroop's body was recovered late in the night. The woman is missing.
The Sheopur-Shivpuri highway was closed from 6 pm on Sunday as the Seep river is in spate at Bawanda, 9 km from Sheopur city itself. Late at night the water receded. Apart from Shivpuri, heavy showers lashed Balaghat, Sidhi, Guna, Gwalior City, Rewa, Ashoknagar, Damoh. Rajgarh, Barwani, Ashoknagar, Dhar City, Bhind, Chhindwara, Ujjain, Rewa, Guna, Shahdol, Bhopal and Indore were also soaked by rain. While the Bay of Bengal branch of monsoon is more active, the Arabian Sea branch is giving moisture. Due to this, 22 districts received heavy rain in 24 hours.
Heavy rain lashed Atta village of Karaira in Shivpuri district on Sunday night. During this, 20 sheep died due to lightning. More than 10 sheep are injured.