Five killed in poll-related violence in Bengal, 33.98 per cent turnout till 11.15 hrs 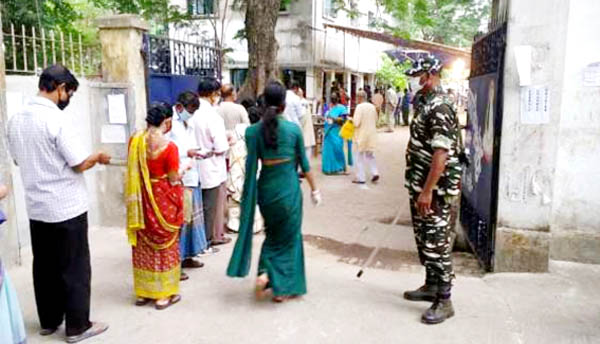 Kolkata,  Apr 10 (UNI) At least five people were killed in North Bengal in poll-related violence even as the fourth phase recorded 33.98 per cent turnout till 1115 hours in West Bengal on Saturday.

At least four people were killed in Sitalkuchi in Cooch Behar district after CISF allegedly opened fire at them after coming under attack amid voting for the fourth phase of Assembly elections in West Bengal.

A first time voter, identified as Ananda Burman, aged 18-20, was also killed when a group of miscreants artmed with guns and bombs attacked him in voters' line at Paglapir booth under Sitalkuchi in Cooh Behar disttrict, even as the 4th phase polling for 44 assembly seats in five districts of West Bengal was underway.

The Election Commission (EC) has asked for a report from special police observer over the firing incident.

Dola Sen of Trinamool claims deaths in Cooch Behar due to firing by central forces.

"Central Forces opened fire twice. In Block 1 of Mathabhanga (Cooch Behar) 1 was killed and 3 injured, in Sitalkuchi block, 3 were killed and 1 injured. Central Forces are doing injustice to people and they have crossed limits. When CM called them out, EC issued her notices," alleged Dola Sen .

Combat force and local police used baton and lathis to disperse a warring mob of the TMC supporters and rival BJP after the shooting incident which hit the victim's back while he was fleeing following a chase by the miscreants.BJP leader Locket Chatterjee's car attacked by locals in Hoogly during the fourth phase poll.

Several allegations of obstruction and intimidation reported from Coochbehar and Howrah

Following Khan's complaint a Trinamool worker has been arrested.

Reports of bombs being hurled in Golabari region of North Howrah constituency.