Five killed in train-truck collision in UP 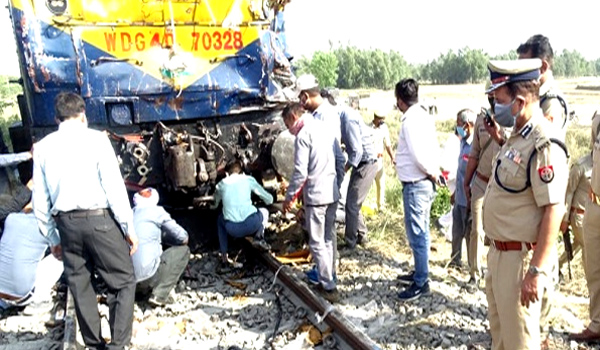 Shahjahanpur, Apr 22 (UNI) Five people including three members of a family were killed when a super fast express train hit a mini-truck and a motorcycle at a railway crossing here on early Thursday morning.

District Magistrate Indira Vikram Singh said that 05012 DN Chandigarh- Lucknow super fast express train was coming from Bareilly when it hit a mini-truck and a motorcycle stranded on the Ullahasnagar railway crossing under Katra police station area at around 0515 hrs.

In the accident, three members of a family along with two others were killed while the driver of the mini-truck was critically injured. DM said one of the deceased people is a native of Punjab.

Three members of a family including a couple and their infant daughter who were travelling on a motorcycle were also killed.

The mini-truck was loaded with cold drinks.

The preliminary report said that the crossing was open when the express train rammed the vehicles. A probe has been ordered.

Due to the accident, the rail services on Bareilly- Shahjahanpur section was disrupted. It will take around 3 hours to normalise the situation.

Meanwhile, Chief Minister Yogi Adityanath has condoled the death of five people in the accident and has announced an ex gratia payment of Rs 2 lakh to the families of the deceased.