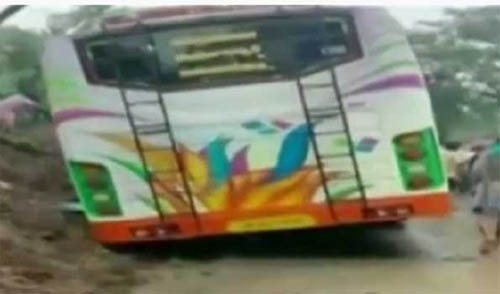 Thanjavur, Jan 12 (UNI) In a tragic incident, five passengers were electrocuted to death and eight others suffered electric shock, when a private bus in which they were travelling came in contact with a live high tension wire at Varagur near Thiruvaiyaru in Thanjavur district on Tuesday.

Thanjavur Superintendent of Police Deshmuk Shekhar Sanjay told newsmen that the bus was coming to Thanjavur from Grand Anaicut with more than 50 passengers.

The driver of bus lost control when he attempted to overtake a lorry. The bus came in contact with the live wire on the roadside in which three passengers were electrocuted to death on the spot, while 10 others injured.

The injured were rushed to the Government Medical College Hospital, where two other passengers died while the others were treated.

An investigation is underway.

Electric shock
when a private bus