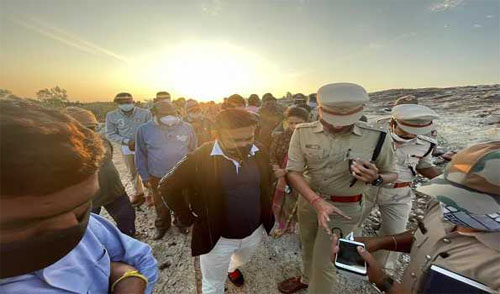 Chikkaballapura, Feb 23(UNI) After shivamogga gelatin blast , A tragic incident five persons killed and three others injured in a gelatin sticks blast in the district on Monday late night Police said on Tuesday that the blast occurred the mining authorities trying to transport gelatin from the mining. The blast occurred due to chemical reactions the van in which they were trying transport was suddenly blast . however, driver of the van escaped and he was arrested by the police . the impact of the blast the bodies were scattered over 1000 meters from the spot.
The deceased have been identified as engineer Umakantha, computer operator gangadhar, watchman Mahesh and ramu accountant and another person .
Injured have been admitted chikkaballapura hospital . peresandra police registered a case in this connectionThe mining was owned by gudubande bjp leader nagaraja reddy, andra Pradesh ragavendra reddy, and shiva reddy . ,
District in-charge and health minister dr k sudhakar visited spot and collected information from police , he said action will be taken against guilty persons .