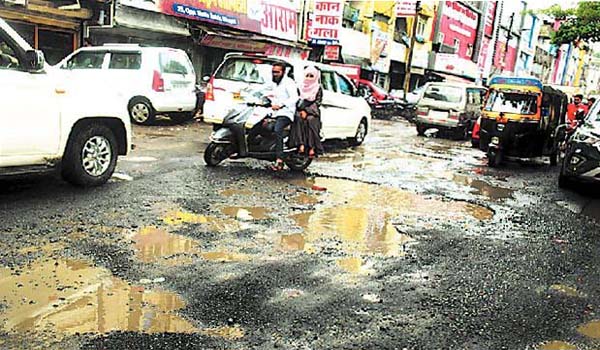 Bhopal: Rivers are in spate due to incessant rains in Vindhya and Gwalior-Chambal region of Madhya Pradesh. Flood waters have entered many villages of Satna, Rewa and Singrauli. The flood affected village of Tyonthar block of Rewa is being evacuated. From here 300 people have been sent to the relief camp. SDRF has been deployed due to worsening flood situation. Many villages of Bhind and Sheopur have been engulfed in floods as Parvati and Sindh are in spate. Two people were washed away while crossing the culvert in Satna. One of them was saved.
Here, the Meteorological Department has expressed the possibility of thunder and lightning in some places in Gwalior and Chambal divisions in 24 hours. At the same time, there is a possibility of rain in Mandsaur and Neemuch. Apart from this, there is a possibility of rain in Rewa, Sagar, Bhopal divisions as well.
There is a flood situation in Terai due to rain in Satna and Sidhi. Rewa is most affected and since Saturday night, 8 gates of Bakia Barrage and 12 gates of Behar Barrage have been opened. Along with this, a gate of Adva Dam has also been opened. This has created a flood situation in the Terai region of the district. The water level of Tamas and Belan river near Patehra is rising rapidly.
Two people on a tractor were washed away while crossing the culvert in Satna's Kotor Patora village. Of these, 18-year-old Vijay Parihar was rescued, while Atul Mishra (23) could not be traced. There was a crowd of villagers at the spot.
Rewa Collector Ilaiya Raja T, SP Rakesh Kumar Singh are keeping an eye on the entire district. On the instructions of the government, the local administration has immediately alerted the people living in the villages adjoining the river Tamas and Belan. In Satna, Sidhi and Singrauli also, villages have been engulfed in water due to the spate of rivers and streams.

Landslide in Sohagi mountain
A landslide occurred in the Sohagi mountain on Sunday morning after two days of heavy rain. The rocks of the mountain have come and fallen in the National Highway 30. However, there was no major accident. The Highway Police with the help of Sohagi Police got the rocks removed with the JCB. Also, trees have fallen at many places on the highway, which are being removed by the Sohagi police since morning.

Sindh river also in spate in Guna: The rain continues in the district since Friday. Sindh river is also in spate due to continuous rain. Parvati is already flowing just below the danger mark. From Saturday evening till Sunday 8:30 am it has rained 3 cm. It has been raining continuously since Sunday morning. Most of the rivers and streams in the Bamori area are in spate. Water is flowing over the bridges. Most of the villages are surrounded by water here.

Tawa Dam level increases: Hoshangabad district has recorded 4.2 mm of rain in the last 24. At the same time, the water level in Tawa Dam is increasing due to rain in Betul, Pachmarhi and catchment areas. One foot of water has increased in 24 hours.
Due to heavy rains in Sidhi-Singrauli, the rivers have swollen. Ramkumar Saket (90) died after a kutcha house collapsed in Sirgudi of the district.
The route from Birsinghpur in Satna to Semaria in Rewa has been closed due to the Mau river being in spate. The water on Mau river is running 4 feet above the bridge.
The Mandakini river is in spate in Chitrakoot. Nearby ghats have been submerged due to rising water level in the river.