Flood situation worsens in many dists of state 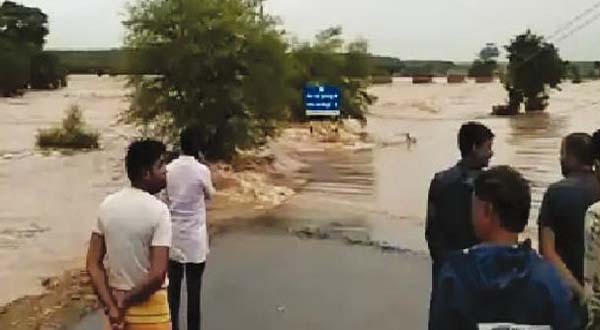 Chronicle Reporter, Bhopal
Bhopal-Incessant rain in the state for the last 20 days is now wreaking havoc. More than 6 inches of rain was recorded in more than 36 cities and districts of the state on Sunday. Many districts are in the grip of floods due to heavy rains. The state has received 9 percent more rain than normal so far. Meanwhile, there are 17 districts where there has been less rain than normal. The Meteorological Department has issued red and orange alerts in many districts across the state for the next two days.
The condition of many districts of the state is suffering due to heavy rains. Rivers are in spate in Rewa, Satna, Guna, Sheopur, Bhind, Singrauli. There is a flood like situation in these districts. 4 to 6 inches more rain has been recorded in Rewa district. The water level of the Tamas river has reached near the danger mark. More than 300 people from low-lying areas have been sent to a safer place. Many villages of the city are in the grip of flood due to the spate in Parvati river.
The monsoon has been wreaking havoc in the Gwalior-Chambal region for a couple days. A large number of villages in Sheopur, Shivpuri and Guna districts have been marooned because of heavy rains.
Due to the activation of low pressure area in South Uttar Pradesh, it is raining heavily in Madhya Pradesh. Due to the highest rainfall in the areas of Gwalior-Chambal, Parvati, Kuno, Kwari and Sindh rivers are in spate, causing floods here. In the next 24 hours also, no relief is expected in Gwalior, Chambal, Bhopal and Ujjain divisions.