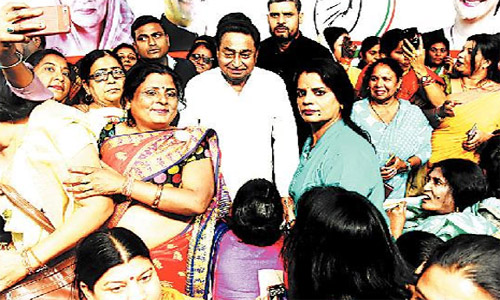 A meeting of office bearers of Madhya Pradesh Mahila Congress organization was held at PCC headquarters on Tuesday. Former CM and Congress state president Kamal Nath attended the meeting. Addressing the Mahila Congress, Kamal Nath said that each district and block will have a different strategy. He said that Mahila Congress is not a thing of decoration. People take out big rallies and lose by thousands of votes. He asked the Mahila Congress organization to focus on the villages and make them members. He told the women's organization not to focus on the entire district. Strengthen 100 booths in a district. He also asked Mahila Congress state president to give a list of villages and booths. Along with this, Kamal Nath gave instructions to make women members and help in the works of Bal Congress.
Kamal Nath said that the culture of Congress is the culture of the country. This culture holds us together. Today this culture is being attacked in the country. Addressing the women officials, he said that there has been a lot of change in politics. You have to recognize it. Earlier women did not attend political meetings. Now different votes are cast in the same family. This change has happened. Mahila Congress has to understand this change.

BJP strong in misleading
The state president said that women are the biggest power, but they are easily misled. BJP is strong in misleading. He said that our competition is not with the BJP but with its organization. We have to keep the picture of the state in front of the youth, farmers and traders. Along with this, he also asked to join the active social organizations in the district. Kamal Nath said that there is 1 year and 10 months left in the assembly elections. Time is short. Now you have to get fully engaged in the preparation for the elections. At the same time, Kamal Nath said that why we are losing elections, it is necessary to do a post-mortem. Wherever we lost elections, I am doing research.

BJP is misleading tribal youth
Kamal Nath took a jibe at BJP's revolutionary Tantya Bhil's yatra on his birth anniversary and said that this is the politics of art. Work is being done to mislead the tribal youth. The youth will not be misled.
State Mahila Congress President Archana Jaiswal said that the strategy of Mahila Congress is to take social issues to the public. BJP has to be exposed. People have to be told about inflation, unemployment. Women will go and meet the families of those dead in Corona. Along with this, Mahila Congress will work in all areas and connect the people.
After the meeting, a public awareness march was also taken out from the Mahila Congress from the PCC headquarters to the board office intersection. A large number of women officers participated in this.