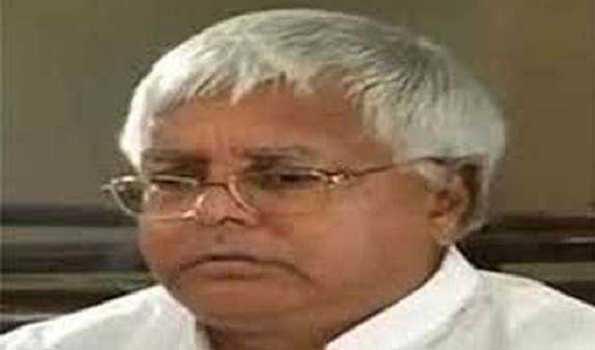 Ranchi, Nov 6 (UNI) In a major setback for jailed RJD Supremo and former Bihar Chief Minister Lalu Prasad Yadav, the Jharkhand High Court on Friday deferred the hearing on his bail plea till November 27. The single judge bench of Justice Apresh Singh deferred the hearing and fixed November 27 as the next date after lawyers of CBI sought more time from the court to file their reply. The decision of the court is deemed as a major setback for Mr Yadav and his supporters as he would be forced to celebrate both Diwali and Chhath festivals behind the bars. At present, he is staying at the bungalow of RIMS Director and undergoing treatment for various ailments.

The RJD leader and former union minister has been convicted in three cases related to the fodder scam. Mr Yadav's lawyer had sought the bail stating his client is eligible for bail as he had completed half the tenure awarded to him in Dumka treasury embezzlement case. A special CBI court had awarded 14 years of imprisonment to Mr Yadav in the case which is one of the cases in the fodder scam.

Lalu Yadav has been lodged in jail since December 23, 2017 after he was held guilty in Deoghar Treasury case. The RJD patriarch has so far got bail in two cases of fodder scam related to Chaibasa Treasury and one related to Deoghar Treasury. Had the HC granted him bail in Dumka treasury case,the RJD supremo could have walked out of the jail.