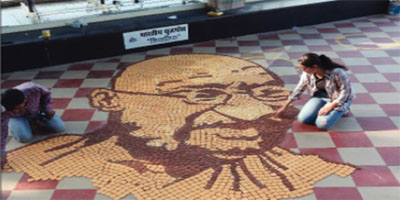 Bhopal celebrated Gandhi Jayanti, along with the nation to mark the 151th birth anniversary of Mohandas Karamchand Gandhi, the man who fought non-violently and got freedom for the country in 1947.

The city had lined up several programmes – all online in view of the ongoing COVID situation. A webinar and online display of Bapu’s photographs were few of the things that the city did to commemorate the day. Commemorating the birth anniversary of Mahatma Gandhi, the students participated in the online quiz based on Mahatma Gandhi. This online quiz was organised by the National Council of Educational Research and Training (NCERT) in collaboration with the school education department, Ministry of Education. The students of schools participated in the different categories. The quiz level was for primary classes III to V, Middle VI to VIII and secondary/senior secondary IX to XII. This quiz was designed to assess the knowledge and understanding of life, works and values that Mahatma Gandhi stood for. The questions were held in Hindi and English medium. The quiz was started at 10 am and will close on November 1, midnight on the mentioned platforms. The quiz portal can be accessed on discover Gandhi portal at Diksha platform and Discover Gandhi mobile app which can be easily downloaded from Google Playstore store. To facilitate Children with Special Needs (CWSN) audio recordings are embedded in the quiz for questions as well as instructions on how to take the quiz. These students would also be participating in the quiz via online mode.

Run and cycling event organized on Gandhi Jayanti at BSSS

On the occasion of the first anniversary of the Fit India Movement launched by the Government of India and the 151st anniversary of Mahatma Gandhi, the Department of Physical Education of The Bhopal School of Social Sciences organized a ‘Run and Cycling’ event on the theme ‘Stay Healthy and Move Ahead.’ More than 150 people participated while covering a distance of 151 kilometers leading to dissemination of the message that we will definitely win the battle against Corona. The campaign began by garlanding the statue of Mahatma Gandhi, the Father of the Nation, situated in the BSSS campus. Principal Dr. Fr John P.J. started the drive by cycling.

Govindpura MLA Smt Krishna Gaur, College Alumni Mr Aruneshwar Singhdev, doctors of AIIMS Hospital, psychlogist Dr Vinay Mishra, members of Nasha mukti kendra, Social workers along with many college students and eminent dignitaries from across the city participated in the event. participating in this DG, Bhopal, Sushobhan Bainarjee discribed the campaign as a smart and beautiful initiative. Starting from BSSS, the drive spread in all four directions of the city. At some places on bicycles while at other places the participants either walked or ran towards the destination and covered a total distance of 151 kilometres. On the way, when one group of cyclist or walkers handed over the placard of ‘Fit India Movement’ to the other, proper sanitisation was carried out. Obasarvar had also places a sanatizer kit with one odometer each in all four directions. In this campaign from 2 year old child Lakshya Sengar to 70 years showed their enthusiasm and passion.

Speaking on the occasion, the Principal of BSSS, Dr. Fr. John P.J said that Gandhiji’s ideals are relevant to society even today. Our campaign is to resolve to defeat Corona virus as well as to follow Gandhiji’s principles of cleanliness. Dr. Vishal Singh Sengar, Head of the Department of Physical Education, BSSS said that norms of maintaining social distancing were followed during the event. He also added that through this event not only have we initiated a battle against Corona but have also shown full faith in the ideals of Mahatma Gandhi by adopting a healthy lifestyle.

On the birth anniversary of Shri Lal Bahadur Shastri, Cooperative and Public Service Management Minister Dr. Arvind Singh Bhadauriya paid tribute to Father of the Nation Mahatma Gandhi and former Prime Minister Shastri in Minto Hall campus. On this occasion, Cooperative Minister Dr. Bhadoria recalled the Father of the Nation, saying that his thoughts, ideals, values, principles and philosophy of life are inspiring to all of us. Bapu gave the message of truth, non-violence and love and paved the way for world welfare by communicating harmony and harmony in the society. They remain a source of inspiration for all of humanity. Minister Dr. Bhadauria, former Prime Minister Late Also paid tribute to Shri Lal Bahadur Shastri and garlanded his statue.