Global skill park should be made of international standard 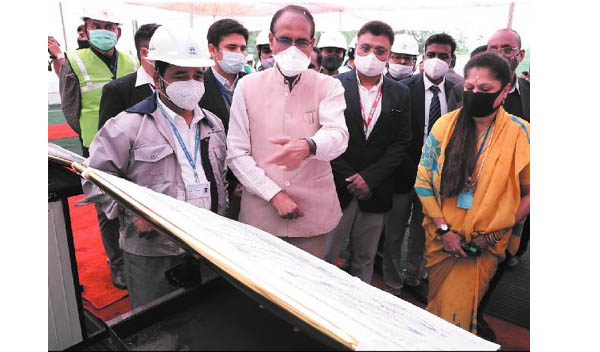 Chronicle Reporter, Bhopal-Chief Minister Shivraj Singh Chouhan today sought information about the ongoing activities for the construction of the unique Global Skill Park to provide skill training and employment to the youth and inspected the works under construction. Minister of Technical Education and Skill Development, Smt. Yashodharaje Scindia was present on the occasion. Chief Minister Chouhan said that the goal is to produce 22 thousand skilled students every year. Along with skill, the confidence of the students should increase so much so that they get selected in good institutions. My visit here on the occasion of foundation laying reflects our seriousness and priority for the project. The departmental minister and his team deserve to be congratulated.

Both time-limit and quality should be kept in mind

Chief Minister Chouhan said that the total cost of the project is Rs 1548 crores. Technical Education, Skill Development and Employment Department has got a loan of Rs 967.50 crore from ADB for the skill development project. Madhya Pradesh government is investing Rs 580.50 crore. A skill park will be built in Bhopal in about two years under the project.

The aim is to build a world-class skill park before December 2022. Some works will be completed in one and a half years and efforts will be made to start courses by the middle of year 2022 and students will start receiving training. Time limit and quality have to be kept in mind. The works of Skill Park will be monitored by Tata Consulting Engineers Ltd., which have been contracted for the design and the Department of Technical Education, the works will be completed with quality.

It’s a dream project, I want that trained students should go abroad also

Chief Minister Chouhan said that Global Skill Park Bhopal is being constructed in 30 acre area in technical consultation and cooperation with Singapore. This is his dream project. This plan was made in the year 2017. He visited Singapore for this purpose. Singapore has expertise in this area. The dream is to ensure that children get so skillful that they get placements.

Skill Park of Bhopal will serve this purpose. The Chief Minister said that the work of this skill park should now be paced up. The delay has come due to the constraints during the former government. The previous government did not even pay attention. Our aim is to make this skill park a global level institution. I wish that the trained students here can demonstrate their ability not only in India but also in other countries and they should get opportunities in other countries, there should be a system to make them so qualified.

Apart from the fixed 11 trades, other trades can also be started as per local requirement.
The trades fixed for training include Mechatronics, Mobile Electronics, Power and Control, Network and System Administration, Refrigeration and Air Conditioning, Mechanical and Electrical Services, Automotive, Mechanical Technology, Hospitality, Retail and Precision Engineering (Global Skills Park City Operated on campus). Initially six thousand students and later 10 thousand students will be trained every year. In five years, 40 thousand students will get employment oriented training. Mega ITIs will be operated at 10 divisional headquarters of the state. Their work will be completed by the Housing Board.

Five important components of the project and institutions

In a meeting at the City Centre of Global Park, Govindpura, Chief Minister Chouhan inquired about the progress made with regard to beginning of the new mega ITI in the state. After this, Chief Minister Chouhan visited Narela Shankari near Ayodhya bypass and visited the Global Park. Costing of this more than Rs 300 crores. Industries have also been consulted for the trades fixed for training.

The five important components and institutions included in the park are Centre of Occupational Skills Exhibition, Centre of Advanced Agriculture Training, TVET Practitioners Development Centre, Centre of Technology Innovation and Entrepreneurship and Center of Skills Research and Development. There will also be hostel arrangements for trainees and trainers in the campus.

Principal Secretary Smt. Caralyn Khongwar and other officials accompanied the Chief Minister during the inspection.