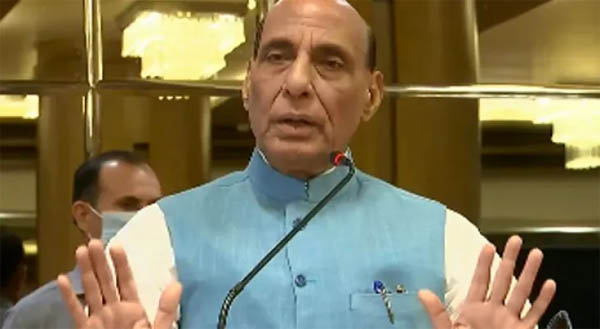 Lucknow, May 14 (UNI) Defence Minister Rajnath Singh on Saturday said that Russia-Ukraine conflict has affected the global supplies and has created a logistical bottleneck which has impacted the prices of commodities and as a result core inflation slightly has increased. Addressing a workshop of capital markets, Rajnath said, "When the world was yet to recover from the supply chain disruptions and logistical bottlenecks caused by Covid-19 a new crisis emerged in the shape of Ukrainian conflict. Both countries are producers of important commodities and everyone knows this fact." He said, "While Russia is a major producer of food grains and hydrocarbons and Ukraine is a major producer of wheat. In such a situation conflict between the two countries has affected the entire world and India is not an exception because today when we export hydrocarbon and oilseeds it has impacted prices in the country. Due to global supplies and logistical bottlenecks the core inflation has increased slightly and I admit the fact." Rajnath said that Covid crisis and Ukrainian crisis have impacted the economy. "Private consumption expenditure which declined due to Disturbances and uncertainties caused by Covid-19 has not recovered yet. Growth of contact based services like hotels and transport has slowed down and if you see neighbouring countries like Nepal, Pakistan, Sri Lanka and many other countries in the world are struggling a lot to meet these challenges," he said. He said that to meet these challenges India has initiated steps and its results are becoming visible. "You must have seen surveys of many agencies which show that India is one of the fastest growing major economies and is progressing continuously. Our exports are creating records and there are possibilities of growing further," he said. The Defence Minister said that India has signed a free trade agreement with Australia and such agreements with other partner countries were in progress. "The government is promoting domestic oil seed products and the Reserve Bank of India (RBI) has also initiated a few steps to ease inflation results of which will be visible soon," he said. He said that the Income Tax and GST collections are so huge that nobody would have imagined that. "Tax collection is not a target, but a medium of public welfare. During Covid revenue was used to provide free ration to more than 80 crore people and it was praised on the international platforms. Public interest cannot be served without taxation and I am pleased and satisfied that the new taxation system of the government has the support of the people of the country," he said. Rajnath said that from the investments taking place at the global and domestic level it is hoped that the existing pressure on the supply chain will ease. "The Prime Minister has introduced the PM Gati Shakti Master Plan of Rs 100 lakh crore which is India's long term response to remove logistical bottlenecks and disruption. To execute the masterplan we have envisioned an expenditure of Rs 100 lakh crore and we have not only announced it, but we have started implementing it," he said. He said that private investment has increased due to production linked schemes, which will strengthen demand. "It is but natural that when investment increases, demand also increases. We have to bring private consumption expenditure to the level where it was before the pandemic. Domestic demand is increasing expeditiously and our economy is recovering in a V shape," he said. The Defence Minister said that the manner in which the government has focused on the logistics and infra it will help in getting rid of hurdles in the supply chain. "Contact based services are gaining momentum which I consider as a good signal to bring the economy back on track," he said.