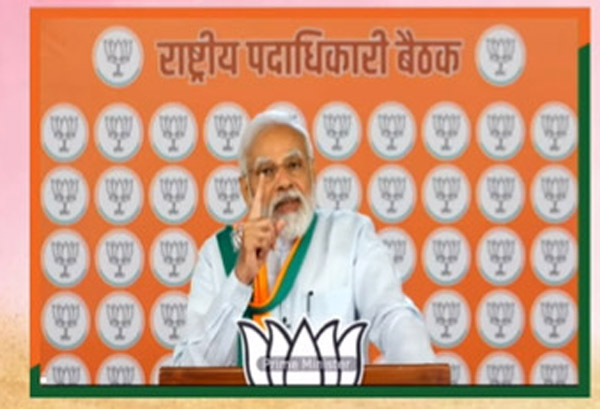 Jaipur, May 20 (UNI) Prime Minister Narendra Modi on Friday asked party workers not to sit in peace and to reach out to every citizen, even as he slammed dynastic politics once again, and slammed opposition parties for dividing people on issues like caste and region. In a virtual address at a meeting of the BJP office bearers being held at Jaipur, the Prime Minister also drew inspiration from 'Ekatma Manava Darshan' or 'Integral Humanism' philosophy of party ideologue Deen Dayal Upadhyay, and 'cultural nationalism' of Shyama Prasad Mukherjee. "The world looks at India with hope... Similarly, people of India have shown their faith in the BJP," the Prime Minister said, adding that it increases the responsibility of the party. He asked party workers not to sit in peace even as the party continued its series of victories across states, and asked them to draw inspiration from the party workers who dedicated their lives for the BJP. "As a BJP worker, we have no right to sit in peace.... Today we have government in 18 states, over 1300 MLAs, over 400 MPs... and after years a party is touching the figure of 100 in Rajya Sabha... When we look at these achievements, it is natural that one may feel like it's enough... But if we are not here to enjoy power," Modi said. "One may say we should take it easy, but that is not the path for us... Aram nahi karna hai (we don't have to take rest)," he said. The PM said BJP workers are still restless because their aim is to take India to the height which our freedom fighters dreamt of. He called upon party workers to ensure hundred percent saturation of government schemes. "I talk about saturation, it will get the country out of the clutches of discrimination, nepotism, appeasement, and corruption," he said. PM Modi said party workers should go to every booth, every home, just as they do during polls, to ensure all beneficiaries are getting benefits of the government schemes. He also launched an attack at dynastic politics, and stressed that the BJP should force all other parties to talk about development in politics. "A subject that we have to constantly work on is to spread development politics everywhere in the country. All other parties should be forced to talk about development politics," he said. "Even today there are some parties whose ecosystem is working on diverting attention from main issues. We should not fall in their trap," he said, asking party leaders to focus on issues of development and government schemes. He said some political parties constantly look for small incidents to create tensions and poison the society. "These political parties always try to instigate people – sometimes in the name of caste and sometimes in the name of regionalism,” he said. “BJP workers must constantly warn people about the dangers of such politics.” On dynastic politics, he said dynastic politics has caused “immense harm” to the country after Independence. “Dynastic parties wasted the country's precious time by resorting to corruption, fraud and nepotism,” he said. He also said youth of the country felt “betrayed by dynastic politics”, and said BJP should provide space for every youth who is “eager to contribute to the country's future." Party president JP Nadda said the three day meet will deliberate and discuss several organizational issues, as well as the result of the recent polls in which BJP won in four out of five states. “Today we will discuss all important issues. How will we work for the people? How will we take the party forward? We are also going to analyse the training work for BJP workers ahead of the Lok Sabha election," Nadda said. He also mentioned the recent electoral victories of the party and said, "We have been successful in elections, not once but multiple times. Our opponents tried to defeat us, but people have showed their faith in PM Modi and the BJP," Nadda said. The three day national office-bearers meeting of the BJP is being held in Jaipur. The meeting started on May 19, and will conclude on May 21.