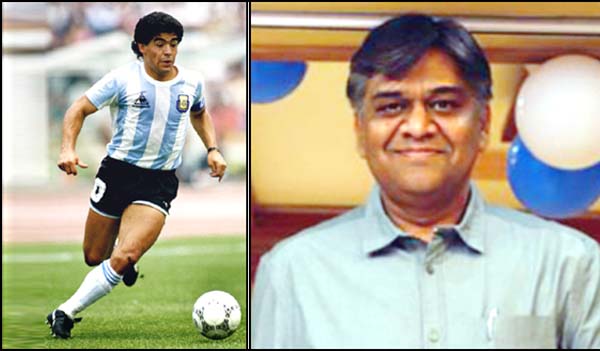 I was in 11th standard when 86’ Mexico World Cup was telecast live on TV. Mexican wave originated here and has since been a common feature across all stadiums. Argentina faced England in the quarter finals on the backdrop of Falklands island War.

The Falklands War was a 10-week undeclared war between Argentina and the United Kingdom in 1982 over two British dependent territories in the South Atlantic: the Falkland Islands and its territorial dependency, South Georgia and the South Sandwich Islands. The result of the war was a British victory.

Tempers ran high on both sides and national pride was at stake ..The best player was determined to take the revenge  and the match began with great hostilities.

The best goalkeeper Peter Shilton was guarding the. English  goal . Maradona was supported with two dangerous forwards Valdano and Burucheega .It was Argentina attack vs the English defence.

First half ended with no goals on either side but the second half saw Hand of God and skill of God”s Son  in just 4 minutes.

These two goals are part of football folklore .

The first one came in the 51st minute Six minutes into the second half, Maradona cut inside from the left and played a diagonal low pass to the edge of the area to teammate Jorge Valdano and continued his run in the hope of a one-two movement. Maradona's pass was played slightly behind Valdano and reached England's Steve Hodge, the left midfielder who had dropped back to defend.

Hodge tried to hook the ball clear but miscued it. The ball looped off his foot and into the penalty area, toward Maradona, who had continued his run. England goalkeeper Peter Shilton came out of his goal to punch the ball clear. Maradona, despite being 8 inches (20 cm) shorter than the 6-foot-1 (1.85 m) Shilton, reached it first with his outside left hand. The ball bounced into the goal. Referee Ali Bin Nasser of Tunisia said he did not see the infringement and allowed the goal.

Huge protest followed and as the commentators were English they called it cheating and gave all the names, the goal stood and Argentina led 1-0 .

More was to follow and the “Goal of the century “ was still to come . Midfielder Héctor Enrique passed the ball to Maradona inside his own half. Maradona then began his 60-yard, 10-second dash towards the English goal, passing four English outfield players: Peter Beardsley, Peter Reid, Terry Butcher (twice) and Terry Fenwick. Maradona finished the move with a feint that left goalkeeper Peter Shilton on his bottom, before slotting the ball into the net to make the score 2–0

The voice of the same English commentators who were abusing Maradona just 4 minutes back ,this time said and I distinctly remember his words, Maradona 2 England  zero.

Listening to this exorbitant price my father said

"What is so special in him , that he is so expensive"

10 minutes later Maradona ran through the entire English defence to score the Goal of the century .

Reaction Of my father  was priceless

He said to me

"Man, he is getting less money "

That is Maradona, The greatest player to Play football.

Tribute by a Fan