Govt buildings decked up ahead of Republic Day 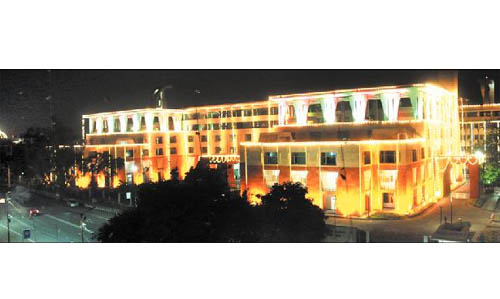 Chronicle Reporter, Bhopal-All prominent government buildings have been decked up ahead of Republic Day. This time special decoration has been done in the capital on 26th January i.e. Republic Day. The recently renovated Sadar Manzil has been decorated with 65x200 feet tricolor with a combination of flood lights. The archbridge built on the Lowe Lake is decorated with a 100x600 feet tricolor.

This tricolour at both the places has been prepared with flood lights. The national flag at Sadar Manzil is about 200 feet long and 65 feet high. The tricolor seen here is of 13,000 square feet in size.

The national flag will be hoisted at Jawaharlal Nehru Stadium on Lal Parade Ground on Republic Day. In view of this, the security in the city has been tightened. Special checks and patrolling is being conducted by Bomb Disposal and Dog Squad (BD&DS) and police.
From the railway station, special checking is being done to markets, bus stands and especially hotels. A watch is being kept against those staying in hotels without an identity card. Hotel operators have also been instructed not to give room to anyone without an identity card. More than 150 checking points have been built across the city. A force of about 4000 thousand has been deployed.
Combing up drives and door-to-door survey are being undertaken in various areas across the city to avoid any untoward incident. Meetings are being held at police station level to sensitise the security guards of various hotels, guesthouses and vital installations. The police and CISF have urged the citizens to inform the police immediately if they have kept a new tenant and to get the person verified at police station. If any suspicious person is seen around the airport, immediately report it to the police station. CISF has also decided to make special security arrangements in sensitive areas. Security has been beefed up in areas around the airport.
The Bhopal police have beefed up security and intensified patrolling and verification drives across the State capital to thwart any untoward incidents. The State capital has been brought under an unprecedented ground-to-air security cover with hundreds of armed personnel keeping a tight vigil for the Republic Day celebrations. Patrolling has been intensified in busy market areas, group patrolling in heavy footfall areas and vehicle checking are also being carried out across the city. Multi-layered security arrangements have been made at busy market places across the city and regular announcements are also being done to alert public to report to the nearest police station in case any unidentified object or suspicious person is seen.

On the occasion of Republic Day, January 26, Chief Minister Shivraj Singh Chouhan will hoist the national flag and address the people of the state at a function to be held in Rewa headquarters.

Collectors will hoist the national flag in these districts

District Collectors will hoist the national flag in the remaining districts of Vidisha, Sheopur, Alirajpur, Jhabua, Burhanpur, Khargone, Katni, Mandla, Dindori, Narsinghpur, Seoni, Shahdol, Singrauli, Sidhi, Damoh, Tikamgarh, Dewas, Ratlam, Agar-Malwa and Niwari and will read out the message of the Chief Minister to the people of the state.