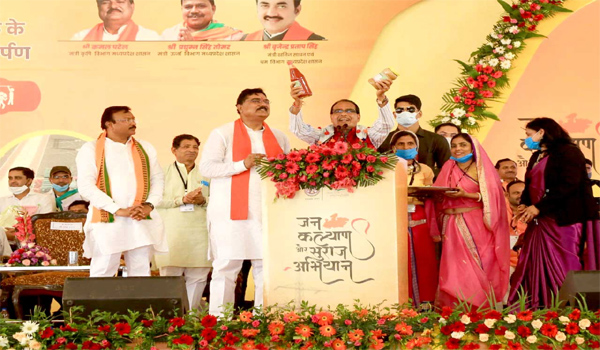 Chronicle Reporter, Bhopal
Chief Minister Shri Shivraj Singh Chouhan said that water would be made available through lift irrigation scheme in the villages of Jhirniya region of Khargone district. Khandwa and Khargone will be made power hubs. Jhirniya will be given the status of Nagar Panchayat. These announcements were made by Chief Minister Shri Chouhan in a public meeting at Jhirniya in Khargone district under Jan Kalyan and Suraj programme.
Chouhan said that the government is concerned about education, livelihood and housing for the poor. Families are getting bigger, so every poor and homeless will be provided land for house. Chief Minister Shri Chouhan said that Sambal Yojana has been started again for the poor.
Chouhan said that there is no dearth of money for the poor in the government's treasury. The government wants to take forward the mothers, daughters and sisters. That is why we increased the reservation of women in local bodies. He said that the products made by the sisters would be promoted. Employment opportunities will be provided to the women of self-help groups. Uniform for school children will be made only by women of self-help groups. There will be no contractor in this. Chief Minister Shri Chouhan said that PESA Act will be implemented for tribal welfare in scheduled areas. There will be no need to wander for ration in remote villages and ration will be given to the poor by visiting their homes. Chief Minister Shri Chouhan also announced to fulfill the various demands raised by public representatives in Jhirniya.
Chief Minister Shri Chouhan inaugurated 16 power sub-stations costing Rs.321 crore 80 lakh and performed bhumi-pujan of 13 sub-stations to strengthen the power system and make supply accessible under the Jan-Kalyan and Suraj Abhiyan. Similarly, he transferred the ex-gratia amount of 321 crore 35 lakh to the account of 14 thousand 475 workers under the Mukhya Mantri Jan-Kalyan Sambal Yojana and the assistance scheme for construction workers through a single click. Chouhan dedicated and laid the foundation stone for 71 development works costing Rs 173 crore for Khargone district. At the beginning of the programme, Chouhan performed pujan of the girls. At the end of the programme, Chouhan benefitted the beneficiaries of various schemes. He also honoured the employees who rendered excellent service during the control of Corona pandemic.