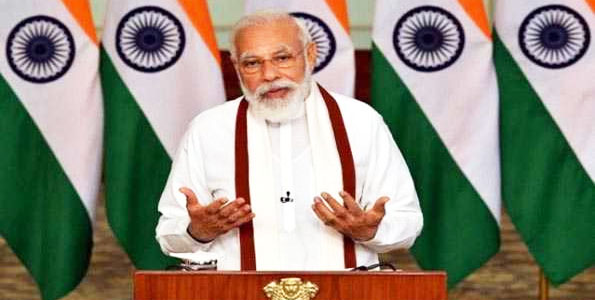 Prime Minister Narendra Modi on Saturday said the government does not discriminate between faith, gender, caste, creed or language and is guided by the desire to empower the 130 crore Indians.

Addressing the 90th birth anniversary of Rev Dr Joseph Mar Thoma Metropolitan through video-conferencing, Mr Modi said, 'We are guided by the desire to empower 130 crore Indians and our guiding light is the Constitution of India.'

He called for pondering on how actions can contribute to national development.

The PM said, 'We have taken decisions not from comfortable government offices in Delhi but after feedback from people on the ground.

'It is this spirit that ensured every Indian has access to a bank account, over eight crore families have access to smoke-free kitchens, over 1.5 crore houses have been given to the homeless and India is also home to the largest healthcare scheme in the world, Ayushman Bharat,' he added.

In the last few weeks, the Prime Minister said the Government of India has addressed both short-term and long-term issues relating to the economy. He said that people-friendly and growth-friendly decisions have been taken in the sectors from the sea to space, from the farms to the factories.

He hoped that the call for Atma-Nirbhar Bharat or self-reliant India, will ensure economic strength and prosperity for every Indian.

He said, 'Today, India is saying - we will produce locally and also buy local products. This will light the lamp of prosperity in the homes of many'.

Speaking about the recently-introduced Pradhan Mantri Matasya Sampada Yojana, Mr Modi said the scheme, with an investment of over Rs 20,000 crore, is going to transform the fisheries sector, increase export earnings and provide more employment to over 55 lakh people.