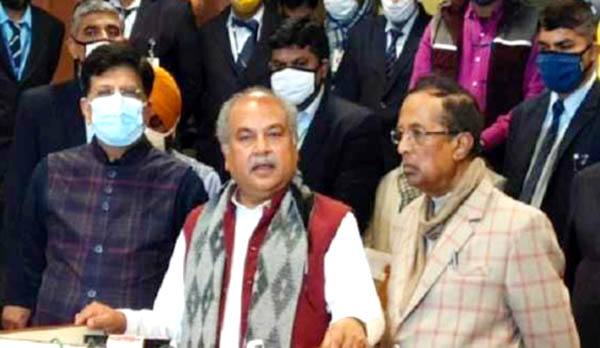 New Delhi, (UNI) The 11th round of talks between the Government and farmers' unions concluded on Friday evening and no consensus was reached during the meeting, with both sides sticking to their positions.

Talking to reporters after the meeting, Union Agriculture Minister Narendra Singh Tomar said that no consensus reached during the talks.

The farmers unions said they only wanted repealing of farm laws, despite the government asking for alternatives, Mr Tomar further said, adding that the Government was committed to farmers' welfare.

Mr Tomar said the Government offered various proposals and the farmers have been requested to consider the government proposals again.

'They (farmers) may convey their decision by tomorrow,' added the Union Minister.

He said the Government had proposed to the farmers' Unions that the implementation of Farm laws should be kept on hold for a period of one to one-and-a-half years.

'There are forces that want the protest to continue, ensuring that no good comes out of it,' Mr Tomar said.

Talking to reporters after the meeting, Rakesh Tikait, spokesperson for the Bharatiya Kisan Union, said the tractor rally will be held on January 26, as planned.

In a statement, Samyukt Kisan Morcha said, 'The deadlock again arose in the meeting with the central government today.

'The government came with the proposal to suspend these laws for 18 months, while the farmers demanded the repeal of the laws.

'In the talks with the police officers, the officers proposed a roadmap in front of the farmer leaders. Leaders will give their reply on this proposal, after holding a farm unions meeting tomorrow,' the statement added.

The farmers' protest over the three farm laws entered the 58th day today, as the protestors continued their stir at various entry points of the National Capital region.

Thousands of farmers, especially from Punjab and Haryana, are staging a sit-in protest along the Delhi borders.

The protest started on November 26. The farmers are demanding a complete rollback of the new farm reform laws and a guarantee on the Minimum Support Price.