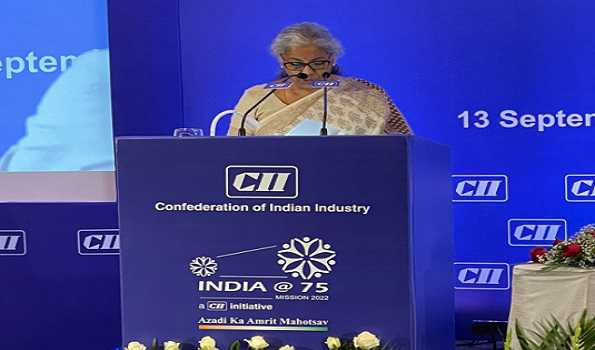 Mumbai, Sep 13 (UNI) Emphasising on the trust that the government reposes in industry, Union Minister of Finance and Corporate Affairs Nirmala Sitharaman on Monday said that the trust is important to leverage the opportunities thrown up by the pandemic, and can take India one generation ahead.
Addressing the CII members at Chennai, she said the trust was also reflected in the government's actions.
Welcoming continuous feedback and inputs from industry, the Finance Minister said the ongoing dialogues with industry had enabled the government to take a series of actions, as the pandemic situation evolved.
Elaborating on the government’s strategy for handling the pandemic, Ms Sitharaman said on the one hand the focus was on ramping up vaccination as that was the big protection against the pandemic while on the other hand the government was working on ramping up health infrastructure, including in the tier 2 and tier 3 cities, by supporting the private sector.
The Finance Minister reiterated that the announced disinvestment plan was on track.
She said the Development Finance Institution announced in the budget would be operational soon. She expressed satisfaction that liquidity was no longer a major concern and that the Bank-NBFC-MFI channel had been de-clogged and from October 15 there would be a special drive to reach out credit to those who need it.
Earlier, while sharing CII’s perspective on the Indian economy, T V Narendran, President, CII, said the first quarter GDP growth of 20.1 per cent firmly established the setting in of the recovery.
He said CII expected a GDP growth of at least 9.5 per cent for this fiscal, provided vaccination continued to gather pace and there were no further severe waves of the pandemic.
Mr Narendran applauded the government’s initiatives towards preparedness for the third wave and interventions aimed at catalysing private investments, such as the Production Linked Incentives and the National Monetisation Pipeline.
He urged the government to continue frontloading its committed capital expenditure to support the demand recovery and for the virtuous cycle of private investments to set in.
Industry captains from leading corporate houses, across multiple sectors participated in the interaction, including the Hinduja Group, Cavinkare, Daimler India Commercial Vehicle, Apollo Hospitals, 3M India, Star Health Insurance, Saint Gobain India, Tractors and Farm Equipment and Chettinad Group.