Guj: 8 patients die as fire breaks out at COVID-19 hospital 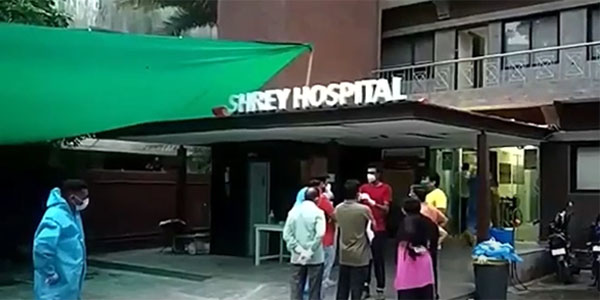 Ahmedabad, (UNI) At least eight patients lost their lives in a major fire that broke at a COVID-19 designated private hospital in Ahmedabad's Navarangpura area in the wee hours of Thursday.

Deputy Chief Minister-cum-Health Minister Nitin Patel said that the fire occurred at around 3 am this morning in the ICU ward of Shreya hospital in the posh area of Navrangpura locality.

Three of the eight deceased were reported to be women.

There were around 50 COVID-19 patients in the hospital at the time of the incident.

Patel said that a high-level committee has been formed to probe the whole incident and submit the report within three days. "Though the exact reason of fire is not yet known, it is understood that it might have been triggered by a short circuit in any of the electronic equipment in the ICU," he added.

The remaining 41 patients have been safely shifted to government-run SVP hospital here.

Meanwhile, one of the four trustees of the hospital has been detained by the police for interrogation. It is also being investigated whether the hospital was fully fire safety compliant or not. The FSL and Fire department personnel have also been involved in the investigation.