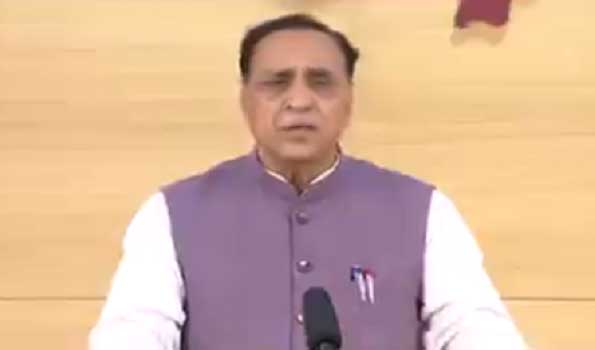 Gandhinagar,Expressing confidence over the upcoming RS polls, Gujarat CM Vijay Rupani on Thursday claimed that the MLAs of Bhartiya Tribal Party (BTP) and Nationalist Congress Party (NCP) in the state would vote for the three BJP candidates.Talking to newsmen here, Rupani said that the writing on the wall was pretty clear that all the three BJP candidates would comfortably win.'All our three candidates have already won. Just the formality of election is left to be done. After the resignation of the five Congress MLAs, the party facing groupism and internal factionism has lost the number to win the two seats for which it has fielded as many candidates,' he said.He said that while all the BJP MLA's were moving freely, Congress has kept its MLAs in a camp in Jaipur where they were enjoying without worrying for the people of Gujarat in these trying times.

'Congress itself has no confidence which was reflected in its discussing the possibility of withdrawal of one its two candidates. Chhotubhai Vasava led BTP and NCP MLA's would also vote for the BJP,' he said.Notably in the 182 member Gujarat assembly there were 175 MLAs currently. In the RS polls being held for 4 seats of Gujarat, a candidate needed 35 first preference votes to win. BJP has 103 MLAs, Congress has reduced to 68, BTP has 2, NCP 1 and one Independent as Congress supported Jignesh Mewani.If the two BTP and one NCP MLA votes for BJP, it would easily win the three seats without facing any cross voting.
BJP has fielded Abhay Bhardwaj, Ramila Bara and former Deputy CM Narhari Amin while Congress has made its spokesperson and former Gujarat minister Shaktisinh Gohil and ex-union minister Bharatsinh Solanki its candidate.