Gwen Stefani says she wishes Blake Shelton had proposed sooner; Reveals teasing him about ‘dragging it out’ 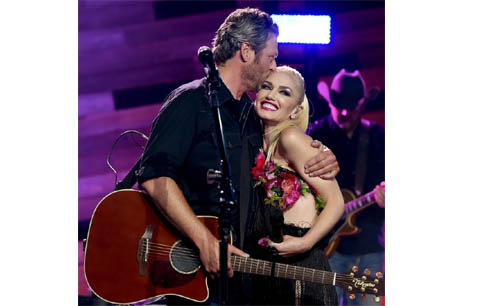 Gwen Stefani recently spoke about her relationship and recent engagement with Blake Shelton. For the unversed, in October Gwen and Blake announced their engagement via Instagram though a very sweet post. The duo has been dating since 2015 and got acquainted on the sets of The Voice, which they were both co-judging. Recently, during an interview on The Tonight Show, the singer told host Jimmy Fallon that she actually wondered for a long time on why her now-fiance Blake Shelton is taking so long to propose.

She told Fallon that she wasn’t expecting it at the moment it happened for sure but was wondering for a good two weeks before that on why Blake isn’t popping the question.  Gwen added, “It was kind of in my mind like, We’ve been together a long time now. What’s going on? I was in that place in my head.”

Gwen also said that the couple wants to wait out and not tie the know until the pandemic is over, so they can have a proper ceremony. She even joked and revealed that she teases Shelton on why he couldn’t have proposed sooner. “It’s like, Blake, why couldn’t you have done it before! Now we can’t have a wedding with the pandemic. It’s like sitting around going, OK, drag it out more!” she said.

If you missed it, back in October, speaking about her engagement day on The Kelly Clarkson Show, Shelton asked his soon-to-be fiancée to grab a fire starter for him from the cabinet, where she ended up finding a ring in a box. "I was like, 'What? Are you serious?'" she recalled excitedly, noting that they didn't end up catching the moment on video.