HIT The First CaseTeaser: Rajkummar Rao looks promising as a fierce cop on a mission in intense crime thriller 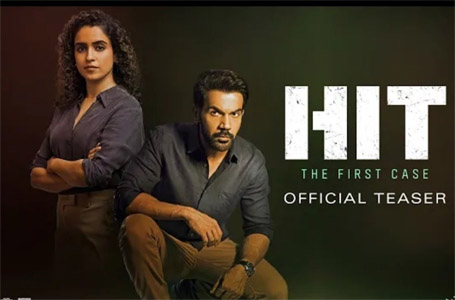 Rajkummar Rao is an actor who aces the art of leaving his audience in awe of his performances. He has been the epitome of versatility and has delivered some impressive performances in movies like Stree, Omerta, trapped, Shaadi Mein Zaroor Aana, Badhaai Do, Kai Po Che, etc. And now, Rajkummar is once again making the headlines for his upcoming movie HIT - The First Case which also stars Sanya Malhotra in the lead. As per a recent update, the makers have unveiled a teaser of the crime thriller and it has got the fans excited.
The over one-minute teaser features Rajkummar as a fierce cop from HIT (Homicide Intervention Team) who is on a mission to find a missing girl. The teaser gives a glimpse of Rajkummar’s intense role as he struggles to strike a balance between his personal and professional life and solve the case while fighting his inner demons. To note, HIT - The First Case marks Rajkummar’s first collaboration with Sanya and going by the teaser the Ek Ladki Ko Dekha Toh Aisa Laga actor has certainly left a mark with his performance.
For the uninitiated, HIT The First Case is the remake of the Telugu mystery action thriller of the same name. Earlier sharing his excitement about HIT, Rajkummar had stated that it has an engaging story which is relevant to the current environment. “As an actor, I am always on the lookout to play characters I haven’t explored and HIT gives me a chance to do that,” he added. The movie is produced by Bhushan Kumar, Dil Raju, Krishan Kumar, and Kuldeep Rathore and will be hitting the screens on July 15.