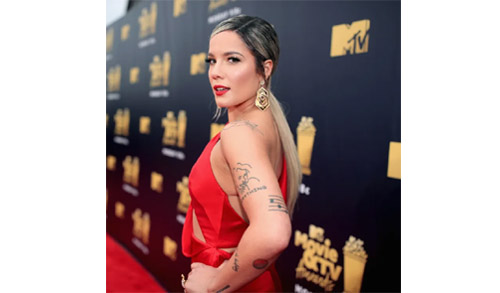 Halsey wants to keep getting inked, but only once they're done having children. On Thursday, October 7, the 27-year-old singer, who had baby Ender with Alev Aydin in July, went to Twitter to address a few questions from fans about life, her experiences as a new mom, and more.
When one follower asked about her new tattoo plans, the star responded as per Page Six. “I wanna tattoo my whole stomach but I think I gotta wait until I’m ‘done having kids’ cause some of my existing belly area tattoos have already seen better days.” Interestingly, while Halsey has over 40 tattoos on her body, one of her most prominent is a picture of Marilyn Mason on the side of her chest. “Got Mason tattooed on my ribs. I love Adelaid so much already. Marily. Not Charles. Sheesh lol,” she captioned a February 2019 tweet.
However, recently back in September, the "Without Me" singer revealed how their stomach has altered since becoming pregnant. Halsey captioned an Instagram picture of their stomach, giving fans a glimpse of the “baby” tattoo on their lower abdomen. “Well…This is what it look like,” she wrote. Fans immediately went to the comments section to thank the artist for being so open about the changes in their body. “Thank you for showing your stretch marks beautiful mama,” while another user wrote, “Thank you for posting the stretch marks.”
According to Page Six, the singer who appeared on the most recent edition of "Saturday Night Live," hosted by Kim Kardashian, also flaunted their baby bump backstage, sharing a picture of themselves pumping breast milk before the performance.