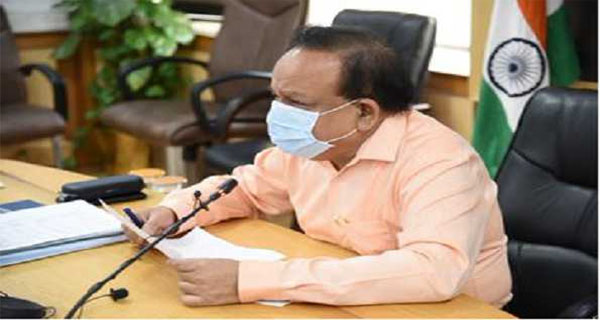 Union Health Minister Harsh Vardhan on Saturday expressed relief that almost the entire North Eastern states was dominated by green zones and only Assam and Tripura had active COVID-19 cases.

Calling for converting the orange zones to green zones, the minister said "It is a huge relief and very encouraging to see green zones in most North Eastern states. As of date, only Assam and Tripura have active COVID-19 cases; the other states are all in the green zone."

During the detailed interaction with the NE States, they highlighted various issues related to testing facilities, health infrastructure, surveillance, and contact tracing, and also shared their best practices. The states were informed that funds have been allocated by Minister of DONER (Ministry of DoNER) for strengthening of the health infrastructure, and states need to submit their proposals for availing of funds under this fund.

For those states that have international borders, he wanted them to take adequate measures at the border areas to prevent exposure by conducting screening of all individual entering the state at entry points and following quarantine protocol as per the guidelines.

In the past 24 hours, 3,320 new confirmed cases have been added and 1,307 patients were found cured. He added that the fatality rate was 3.3 per cent and recovery rate was 29.9 per cent. He also added that (as of Friday) there were 2.41 per cent present active COVID-19 patients in ICU, 0.38 per cent on ventilators and 1.88 per cent on oxygen support.

He also said, "The testing capacity has increased in the country and it is 95,000 tests per day with 332 Government laboratories and 121 private laboratories. Cumulatively, 15,25,631 tests have been done so far for COVID-19."

To maintain the positive status of COVID-19 management in the North East, Dr Harsh Vardhan advised the states to ensure that the returning migrant labourers, students and those returning from abroad should be screened and quarantined as per the guidelines and protocol laid down by the by Health Ministry and Ministry of External Affairs. Guidelines for discharging patients was also revised and needed to be followed by all the states.

He held a high level meeting with Arunachal Pradesh, Assam, Manipur, Meghalaya, Mizoram, Nagaland, Tripura and Sikkim to review the status of COVID-19 in the north-eastern States along with the measures being taken for its containment and management, in the presence of MoS Health Ashwini Kumar Choubey here over video conferencing. It was attended by Dr R Lalthangliana, Health Minister of Mizoram, Alo Libang, Health Minister of Arunachal Pradesh, and Piyush Hazarika, MoS, Health and Family Welfare, Assam along with senior officers from the eight states, an official release here said.

Urging for greater surveillance for Severe Acute Respiratory Infections (SARI)/Influenza Like Illness (ILI) in unaffected districts and districts which have not reported cases from last 14 days and more through the IDSP network in collaboration with Medical College Hospitals, he asked states to aggressively pursue the download of Aarogya Setu app to aid contact tracing and surveillance, and help people access COVID-related services.

The states were reminded that in addition to the COVID-19 care, non-COVID-19 health services such as ANCs for pregnant women, immunisation drives, OPD/IPD services, screening of NCDs and TB diagnosis and treatment were equally important and should not be neglected.

Also, facilities of telemedicine and tele-counselling could be used for reaching to a larger population for their healthcare needs.

States were also informed that helpline number 104 in addition to 1075 can be used for grievance redressal for non-COVID essential services, and for providing the needed information to the people on their location etc. States were also advised to keep adequate stock of essential medicines and explore home delivery by engaging volunteers for the purpose.