Havoc of dengue continues in city, larvae found in houses 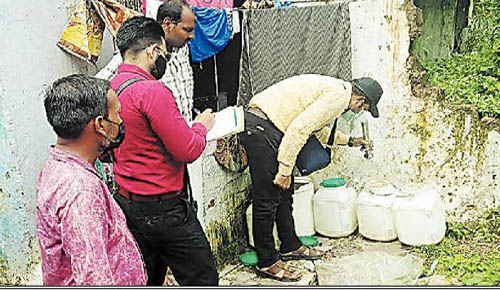 Chronicle Reporter, Bhopal
After corona, now the number of dengue and chikungunya patients is increasing continuously in the capital Bhopal these days. To prevent mosquito-borne diseases, the District Malaria Department is continuously conducting larva surveys in the city.
According to the team, due to the carelessness of the people, larvae are being found in most of the houses. District Malaria Officer Dr. Akhilesh Dubey said that every day many people are being punished, they are being released after warning the larvae for the first time.
Larva survey done in these areas: Under the direction of Bhopal Chief Medical and Health Officer Dr. Prabhakar Tiwari and under the leadership of District Malaria Officer Akhilesh Dubey, on Tuesday, survey was conducted in Zone-3, Ward No.-13, Nai Basti, Tila Jamalpura area. During this, larvae were found in some houses. The larva was destroyed by checking the container by the team. The members of the team were told about the ways to avoid malaria, dengue, chikungunya and the use of mosquito nets. District Malaria Officer Dr. Akhilesh Dubey told that to avoid dengue and malaria, use mosquito net and keep cleanliness around the house. During this, DMO directed the entire team that all should reach the field on regular time and take action of larvae survey and destruction. During this, District Coordinator, Family Health India Dr. Santosh Bhargava and District Advisor, Malaria Ruchi Silkari appealed to all the people in the camp for regular cleaning to prevent mosquito, change the water every seven days.