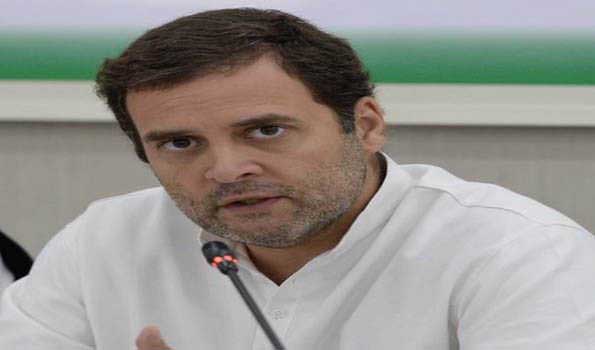 New Delhi, Amid growing concerns over the spread of the coronovirus, former Congress president Rahul Gandhi on Thursday likened government's efforts to control the situation to captain of Titanic telling passengers not to panic as his ship was unsinkable."The Health Minister saying that the Indian government has the coronavirus crisis under control, is like the captain of the Titanic telling passengers not to panic as his ship was unsinkable", Mr Gandhi tweeted. He also said that it is time the government made public an action plan backed by solid resources to tackle thE crisis.On Wednesday, Union Health Minister Harsh Vardhan had said that the Centre's coordinated and collective effort by all state governments, in a mission mode to ward off the threat posed by Coronavirus (COVID-19) after the number of cases which tested positive, rose to 29 from six, in a day in the country.

Mr Vardhan has also made a suo motu statement in the Rajya Sabha, over corona outbreak and said the government is reviewing the situation very closely.
'I am daily reviewing the situation. A Group of Ministers consisting of Minister of External Affairs, Minister of Civil Aviation and Minister of State for Home Affairs, Minister of State for Shipping and Minister of State for Health and Family Welfare chaired by me have been constituted to monitor the situation. The Group of Ministers has met four times since its inception on February 3.'Meanwhile, NDA MPs targeted Mr Gandhi and said he and his mother, Congress president Sonia Gandhi should get tested for coronavirus as they have just returned from Italy and may spread it.While Rashtriya Loktantric Party MP Hanuman Beniwal had made this remark in the Lok Sabha, which led to commotion in the House, BJP MP Ramesh Bidhuri also said Mr Gandhi returned from Italy just six days ago, so he should be checked for coronavirus."MPs who sit with Mr Gandhi may also catch the virus. Many from Italy have tested positive for coronavirus. He should get himself tested and inform Parliament," Mr Bidhuri told reporters outside Parliament.