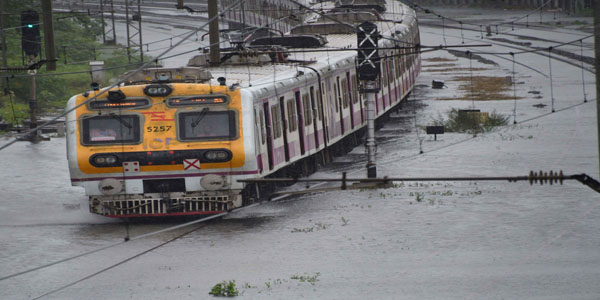 In a rare development, many parts of south Mumbai like Churchgate, Marine Lines, Marine Drive, Kalbadevi, Dongri, Byculla, Mazagaon, Parel, Dadar and its surroundings witnessed heavy waterlogging throwing the central business districts of the area out of gear.

The Central Railway's suburban train services, which functioned normally, were suspended between Chhatrapati Shivaji Maharaj Terminus-Kurla on the mainline and CSMT-Vashi on the Harbour Line after a torrential downpour, CR spokesperson Shivaji Sutar said.

Similarly, the Western Railway's spokesperson Sumit Thakur said that owing to heavy rains, with some tree branches approaching on railway tracks between Churchgate-Mumbai Central, suburban trains were suspended and all trains were being reversed from Mumbai Central, Dadar, Bandra and Andheri.

Major landmarks like the Bombay Stock Exchange (BSE)’s Phiroze Jeejeebhoy Tower suffered the brunt of the rain fury, when its massive signboard on the 29th floor was ripped off and hung precariously.

Some sections of a cement cladding adorning the exteriors of the Jaslok Hospital in south Mumbai were blown off and fell in pieces on the road below, but there were no reports of any casualties.