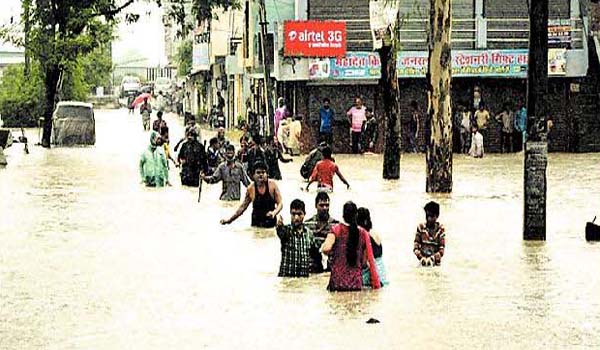 Bhopal: Chief Minister Shri Shivraj Singh Chouhan has said that about 1171 villages in Shivpuri, Sheopur, Datia, Gwalior, Bhind and Rewa have been affected due to excessive rains and floods. A total of 200 villages are submerged in water. SDERF, NDERF teams have rescued about 1600 people and shifted them to safer places. Armed forces have been called. Five Air Force helicopters took off from Gwalior this morning. They went for 8 miles but could not land for rescue due to bad weather. Chief Minister Shri Chouhan has appealed to the people of the affected villages to remain alert. We are worried about you. Instructions have been given to arrange relief camps and food. Do not pay heed to rumours. All dams are safe, have confidence. The government is making every effort. People of the affected areas should remain motivated.

73 teams of SDERF and NDERF engaged in rescue operation
Chouhan said that as soon as the weather improves, helicopters will again leave for relief and rescue work. About 22 villages in Shivpuri and Sheopur particularly, are submerged in water. Yesterday 11 people were rescued by the Air Force. 70 teams of SDERF and 3 teams of NDERF are engaged in rescue operations. The central government has been requested to send more teams.

800 mm of rain in two days
Chouhan said that excessive rains and floods have resulted in a dire situation. Shivpuri and Sheopur received 800 mm of rain in two days. Flood situation has been created due to unexpected rains. It felt like the clouds had burst. Boats are unable to sail due to the flow of water. Three people who were stuck on a tree in Beechi village of Shivpuri, have been rescued. Villages have a deserted look. A priest is stuck on the roof of the temple. We are worrying about them and making arrangements for food and relief. We are making efforts to pacify people. Chief Minister Shri Chouhan said that me and my ministers are constantly monitoring the situation.

Railway traffic hit, Gwalior-Indore Intercity Express stranded for 15 hours
Heavy rains have also affected railway traffic in Madhya Pradesh. Due to heavy rains near Shivpuri, the railway track was filled with water. Due to the waterfalls flowing from the mountains on both the tracks, the railway track started looking like a river. Due to this, Gwalior-Indore Intercity Express stood for 15 hours at Padarkheda railway station near Shivpuri from 9:30 pm on Monday. The train left Gwalior at around 8 pm on Monday night. This train stood here till one o'clock on Tuesday afternoon. After this it left from Padarkheda and reached Guna after 4 hours at 5 pm. There are 400 passengers on the train. There are no lights in the coaches of the train, due to which the passengers remain in panic. Food and water were provided to them by the Railways.
This train was being shown as canceled on the website of IRCTC. Earlier there was a preparation to bring the train back to Gwalior, but after 1 o'clock in the afternoon the water on the track decreased slightly, then the train was pushed forward. Slowly the train reached Guna in 4 hours. Then the passengers heaved a sigh of relief. Passengers were not able to return to Gwalior even by road due to the flow of water over the stretch of Parvati river at Mohana between Gwalior to Shivpuri. A bus stuck here in the morning has been pulled out by the district administration and police.