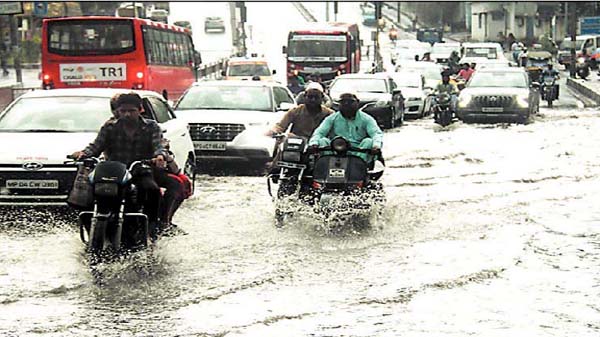 Chronicle Reporter
Heavy rain lashed Bhopal on Sunday afternoon that continued till late evening putting Bhopal Municipal Corporation (BMC) on toes.
In the state capital, rain provided instant relief from humidity though low lying areas were flooded. Electricity cuts hit many areas. The electricity distribution company offices were flooded with complaints of load shedding as power supply was disrupted due to damaged electric wires.
Commuters were spotted dragging two wheelers and applying kicks as their vehicles broke down while riding through heavily water logged roads. Prominent roads and rotaries where water logging was noticed included Jyoti Talkies (near Board Office Square), Banganga, Hamidia Road, Nadra Bus Stand, Central Library.
Call centres were flooded with complaints. Most complaints were of choked drains, which carried filth in houses and on roads in congested areas of the Walled City. Choked drains created flood like situation in many colonies. Complaints were also received for water logging in basements. BMC teams were sent for rescue operations. BMC teams were sent to clear the chocked drains in many colonies to clear the rain water.

Low pressure area has formed
Break monsoon like conditions were prevailing over Northwest India and adjoining parts of Central India since last 3 to 4 days. Western end of axis of monsoon trough was in the foothills of Himalayas. A low-pressure area has formed over northwest and adjoining West Central Bay of Bengal, according to Skymet Weather.
The system will move in a westerly direction towards Vidarbha across coastal Andhra Pradesh and South Chhattisgarh. Western end of axis of monsoon trough will also be pulled down to south leading to revival of monsoon rain over Punjab, Haryana, Delhi, and most parts of Madhya Pradesh.
Low pressure will get weakened by August 31 over Madhya Pradesh and will be seen as a cyclonic circulation. Rain may commence over Western districts of Madhya Pradesh, East and south Rajasthan and parts of Gujarat by then. On and off rain may occur over east and South Rajasthan and many parts of Gujarat between September 1 and 3.
Ujjain, Ratlam, Neemuch, Dhar, Khandwa, Khargone, Bhopal, Indore, Barwani, Guna and Shajapur district of Madhya Pradesh may witness revival of rain.