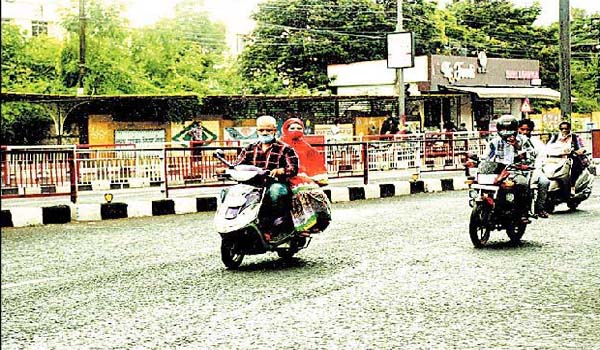 Bhopal: Parts of the state including Gwalior-Chambal and Bundelkhand in Madhya Pradesh received heavy rains on Monday. Sagar, Chhatarpur and Tikamgarh of Bundelkhand besides Gwalior, Morena, Bhind got relief as heavy rains lashed. The nullahs and drains were in spate. This rain resulted from the local system. Even now, rain is awaited in large parts of the state including Bhopal-Indore.
It has been raining in Morena-Bhind since Sunday evening and Monday morning. Bhind also received heavy showers. The rain brought relief to the people battling the heat. The city was burning with heat due to lack of rain for several days. Within half an hour of rain, the drains of the city were overflowing. Along with this, some roads of the city were also flooded. It rained heavily in Gwalior even after 10 am.
It also rained in Sagar, Chhatarpur and Tikamgarh of Bundelkhand. There were showers in some parts of Sagar city. On the other hand, it rained heavily in the rural areas. According to the Meteorological Department, with the change in the direction of the winds, the weather has started changing.
Farmers have got relief due to rain. There is a possibility of rain in Sagar in the next 48 hours. Sagar district has received an average rainfall of 227.7 mm so far in this rainy season. Whereas last year so far the average rainfall was 258.3 mm. Rainfall occurred in Chhatarpur and Tikamgarh as well.
It rained heavily in Chhatarpur district on Monday amid the hide and seek of clouds. Not only did this bring relief from the heat, but farmers also breathed a sigh of relief with the onset of monsoon. This year, due to the indifference of the weather and the delay of monsoon, not only the common people are suffering, but the farmers are also worried.

Area under soybean cultivation declines due to scant rainfall
Bhopal: Chief Minister Shri Shivraj Singh Chouhan has said that the Department of Agriculture should remain in constant contact with the scientists of the Indian Meteorological Department. On the basis of rainfall conditions and related forecasts in the state, the farmers should be given advice in relation to the Kharif crop. If there is a possibility of less rain, then farmers should be motivated to sow alternate crops that need less water.
Chief Minister Shri Chouhan was addressing a meeting organized in the Mantralaya on the weather forecast. Farmer Welfare Minister Shri Kamal Patel joined virtually. The officers of the Meteorological Department were present along with Chief Secretary Shri Iqbal Singh Bains, Agricultural Production Commissioner Shri K.K Singh.
Information was given in the meeting that 44 percent rainfall has been recorded in the Chambal area. Sowing over 16 percent area has been done. Area under soybean cultivation has declined by 10 lakh hectares. Maize sowing is normal.
Officials of the Meteorological Department informed that in the last week of July there is a possibility of rainfall in the state. Normal rainfall has occurred in 16 districts of the state, while in 33 districts the rainfall is less than the average. More than normal rainfall has been recorded only in Singrauli district.