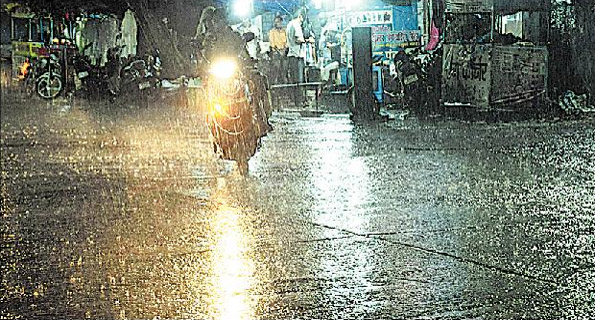 Chronicle Reporter, Bhopal
With the arrival of monsoon in Madhya Pradesh, it has started raining. Heavy rain lashed Bhopal on Wednesday putting Bhopal Municipal Corporation (BMC) on toes. Low lying areas were flooded and electricity cuts hit MP Nagar, Polytechnic College, Jahangirabad among other areas for hours when it rained. The electricity distribution company offices were flooded with complaints of load shedding as power supply was disrupted due to damaged electric wires.
Meteorologist PK Saha said that the monsoon has become active. It is raining well across the state. At some places, more than 10 cm of water is falling. Heavy shower accompanied by lightning and gusty winds lashed the city.
Southwest Monsoon whose northern boundary is passing through Porbandar, Baroda, Shivpuri, Rewa. Except for some areas including the districts of Chambal division and Gwalior, then monsoon rains are happening all over the state. During the last 24 hours, it rained in Bhopal, Ujjain, Tikamgarh, Indore, Guna, Khandwa, Khargone and Dhar in the state. In Khandwa, the water fell for about 2 inches. The day's temperature has dropped. Maximum mercury reached 33 in Bhopal. Indore and Jabalpur recorded 33 degrees Celsius, while Gwalior recorded 37 degrees Celsius.

arrival of monsoon in Madhya Pradesh