Highest number of Covid cases in Indore despite lockdown 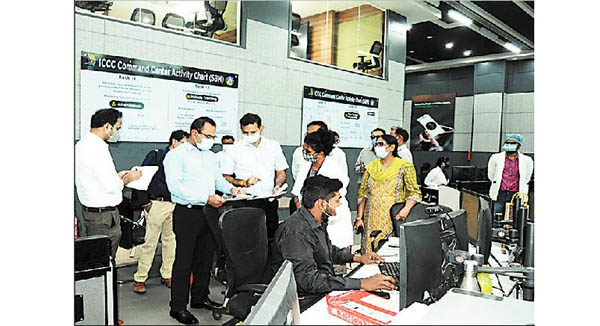 Chronicle Reporter, Bhopal
Indore has become the first city in the state with six new deaths in 24 hours where total of 1005 deaths have taken place in the entire corona period. Corona curfew / lockdown will continue here till the morning of April 19 here. The situation has worsened since September, the peak time of the first wave of the Corona era. Despite the lockdown, the maximum numbers of cases are being reported in the state. Deaths have also been the highest.
The people were seen in large numbers in the vegetable markets, crowds were seen in the mandis as soon as they get 3 hours relaxation in lockdown and during this time Covid rules were flouted

Gwalior: infection rate reaches 26 percent
Gwalior has become the third most infected district in the state. On Sunday, reports of 515 people out of 1,924 samples have been Corona positive. The infection rate here has reached 26%. The district administration has declared containment zones in more than 15 areas of the 3 wards of the city. The lockdown will remain here till 19 April.

Social distancing flouted in Ujjain
In Ujjain, till the morning of April 19, concessions were received on Monday morning amid lockdown, the crowd in Mandi became uncontrollable. The social distance norms were flouted. All temples including Mahakal are also closed here. In the last 9 days, 1193 new patients have been found. At the same time, the number of deaths due to corona infection has also increased.
The crowds gathered in Ujjain as soon as the vegetable markets opened. They neither followed social distancing nor put on a mask

Over100 cases daily in small cities
According to the Health Department report, apart from four big cities, corona infection has engulfed smaller cities. More than 100 cases are now being found in Vidisha, Ujjain, Sagar, Rajgarh, Ratlam, Rewa, Narsinghpur, Balaghat, Barwani and Betul. Now there are only 7 districts including Sidhi, Niwari where 20 or less cases are being received in a day.