Holy city Orchha will be linked with Ayodhya: Gadkari 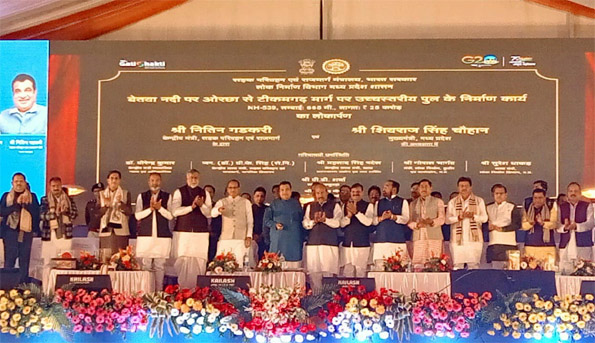 Chronicle Reporter, Bhopal
Union Minister for Road, Transport and Highways, Shri Nitin Gadkari has said that he has been fortunate to carry out the basic work related to the movement of common people on the land of Bundelkhand, especially on the land of Ramlala government in Orchha. He said that as Ayodhya is being connected to Janakpur, similarly the holy city of Orchha will also be connected to Ayodhya, for which an action plan is being prepared.
Union Minister Shri Gadkari was addressing the inauguration and foundation stone laying program of 18 road projects at a cost of Rs 6800 crore at Orchha in Niwari district today. Chief Minister Shri Shivraj Singh Chouhan presided over the programme.

Prepare a roadmap for Datia-Jhansi-Orchha circuit
Gadkari said that like 84 Kosi Parikrama foot-path is being constructed in Ayodhya. On the same lines, connecting Orchha and surrounding areas, Shri Ram's pad-path should be constructed. It should include the action plan of things related to the life story of Shri Ram. Just like the description of Ayodhya is found in the Puranas, on the same lines prepare an action plan by including references related to Shri Ram and things related to wall paintings etc. He said that Pitambara Peeth should prepare a roadmap for the construction of Datia-Jhansi-Orchha circuit. Give a proposal to modernize Orchha's bus stand and develop it from the point of view of beautification tourism.
Union Minister Shri Gadkari said that the road infrastructure of Madhya Pradesh and Bundelkhand will be brought at par with that of America by the year 2024. Gadkari approved the proposal of the state government for the construction of roads and culverts costing about one thousand crore rupees. He said that after the construction of the four-lane road, the journey from Bhopal to Kanpur would be completed in just 7-8 hours.
Chief Minister Shri Chouhan has said that Ram resides in our every hair. Our existence and life is also Ram. Shriram is the identity of India. Lord Shriram and Tulsidas will be taught in children's books. Chief Minister Shri Chouhan said that on the lines of Shri Mahakal Mahalok in Ujjain, Ramraja Lok will be constructed in Orchha and Vanvasi Ramlok in Chitrakoot. Along with this, the state government will also work on the Ram-Van-Gaman path. Orchha will be connected to Ayodhya. With the cooperation being given to Madhya Pradesh by the Union Minister Mr. Gadkari, we will develop all the bus stands of the state in terms of attractiveness and tourism. Minister Mr. Gadkari

Highlights
Construction of Shri Ram pad-path connecting Orchha and surrounding areas
By the year 2024, the road infrastructure of Madhya Pradesh and Bundelkhand will be equal to that of America
Make a roadmap for Pitambara Peeth-Jhansi-Orchha circuit
Ramraja Lok will be built in Orchha and Vanvasi Ramlok in Chitrakoot: CM
State govt will also work on Ram Van Gaman Path
CM and Gadkari inaugurated and laid the foundation stone of road projects