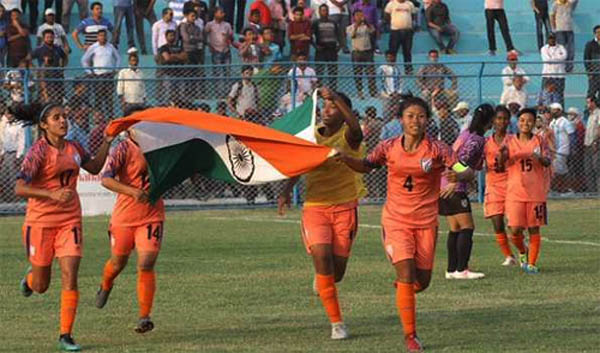 New Delhi, Jan 24 (UNI) With the nation celebrating the National Girl Child Day on Sunday, country's biggest women football stars highlighted the importance of more opportunities for young girls to play and how a sport can help bring the best out of every girl child.

As Indian football continues to move forward together, a key aspect of the game's growth in the country has been the continuous development of women's football - right from the grassroots level through the Golden Baby Leagues to the senior national women's team.

Indian women's national team captain Ashalata Devi shared her own experience of how she overcame opposition from her own family when she started playing football and how she doesn't want any girl to face the same situations that she did.

"When I started playing football, there were a lot of struggles that I faced because my mother did not support me playing the sport. Whenever I used to come back home after practice, I would get beaten up and she used to ask me why I wanted to play and say that this is not a game for women, you will get injured and then you will not get married. She was very scared," Ashalata was quoted as saying by the-aiff.com.

"I even stopped playing for a few months and then did not tell her when I started playing again. Once I got selected for the India U-17 team, she started supporting me. And now, when I tell her that I have played a lot and want to stop, she scolds me and tells me that that this is the time to prove to the world what I can do and motivates me to keep playing and give my best.

From my experience, my parents did not support me and thus, I did not focus much on education back then. I don't want any child to face this situation. Sports and studies can be balanced together and for that, support from parents is very important," she added.

Mercurial forward Bala Devi, who plays at club level for Rangers Women's FC in Scotland and is the first Indian woman football to sign a professional contract with a top-division European club, talked about how she developed a passion for the game and how she hopes to inspire the next generation of women players through her journey.

"I used to play with boys in my locality as a child and there were many who did not like me playing and asked my parents to stop me.

However, my father himself was a footballer and a striker too, and he never stopped me. He taught me a lot and told me to always keep football in my mind and even sleep with a ball in my hand. That's how I developed the passion I have for the game," Bala stated.

"Everyone has expectations from this journey of mine (in Scotland) and after scoring my first league goal for Rangers, people were talking not only in India but in Europe and across Asia that an Indian player has made history. It was really a proud moment and I want all the girls back home to be inspired," he added.

With India set to host the FIFA U-17 Women's World Cup and the AFC Women's Asian Cup next year, Bala feels that having events of such magnitude will encourage more and more young girls to take up football and help change the mindset of parents across the nation.