Hrithik Roshan - Deepika Padukone to come together for Siddharth Anand's next action venture? 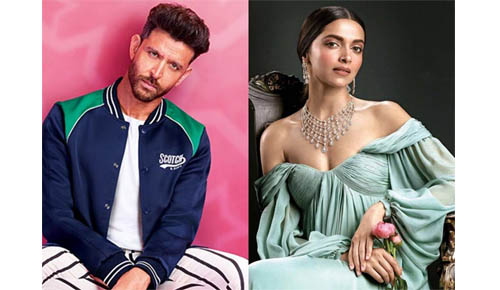 While reverting to birthday wishes, Deepika Padukone indicated that she is going to work with Hrithik Roshan. Well, the news became more evident when Deepika replied to Hrithik's birthday wish on social media and wrote, "Now for another big celebration coming up in a couple of days." Now, as per the reports, the actors are all set to come on the board for Siddharth Anand's next action venture.

Hrithik Roshan and Deepika Padukone starrer action flick will revolve around the fighter jets and is expected to go on the floors by the end of 2021. Reports are also suggesting that the official announcement will be made on Hrithik Roshan's birthday. Well, if reports are true then it's exciting news for Deepika and Hrithik Roshan who want to see them on the big screen.

Both actors caught media attention when they were spotted together at Rohini Iyer's house party and had the best time with each other. There were several times when different production houses wanted to cast them together but due to the tight film schedules it couldn't happen.

For now, Deepika Padukone is shooting for YRF's spy-action film, 'Pathan' opposite Shah Rukh Khan. Apart from this, she will be seen opposite Prabhas in Nag Ashwin's untitled film. On the other side, Hrithik Roshan is preparing for his father's directorial venture Krrish.