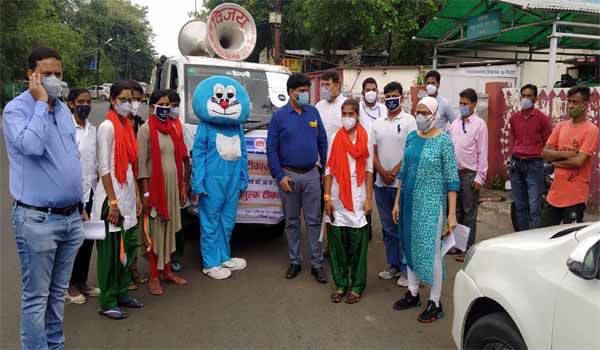 Festive atmosphere at vaccination centres
A target was set to vaccinate 10 lakh people in the vaccination mega campaign. To achieve the target, 7000 vaccination centres have been set up in 52 districts of the state. A festive atmosphere was created at all the centers and the people who came to get the vaccine were also welcomed by applying tilak. Chief Minister Chouhan said that everyone came forward with self-motivation for the protection of human life and ensured their participation in the Maha Abhiyan. The Chief Minister also thanked the heads of various social organisations including public representatives, religious leaders, litterateurs, intellectuals and dignitaries, whose efforts gave impetus to the vaccination work.
Chouhan also administered the oath to the people who came to the Vaccine Center to be motivator in the vaccination campaign.
Suitable arrangements have been made at all centers to provide vaccine to the target group in the vaccination campaign. Along with this, arrangements were also made by the local administration for transportation by vehicles to and from the center, especially for the elderly and Divyangs.

Vaccination numbers kept doubling every hour
Due to the enthusiasm shown by all the people towards the vaccination campaign, the vaccination report kept doubling every hour. 60 thousand till 10 am, one lakh 75 thousand till 11 am, 3 lakh 37 thousand till 12 noon, 5 lakh 21 thousand at 1 pm, 7 lakh 10 thousand at 2 pm, 8 lakh at 3 pm and 12 lakh 12 thousand people got the vaccine at 5 pm. Chief Minister Chouhan said that these vaccination figures are proving that the people of the state are ready to fight against the third wave of corona.
To make the vaccination campaign a success, a motivator was appointed at each vaccine centre with suitable arrangements at the centres. The members of the Council of Ministers including the Chief Minister himself, MPs, MLAs, public representatives of urban and rural areas, religious leaders including members of the Crisis Management Group, social workers and enlightened citizens of different sections played the role of motivator.