Human rights are violated when viewed in 'political hue': PM 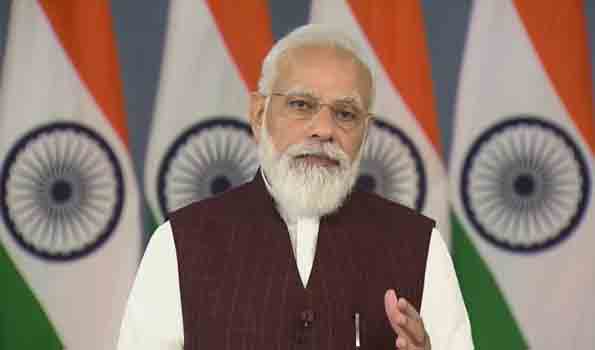 New Delhi, Oct 12 (UNI) Prime Minister Narendra Modi on Tuesday asserted that human rights are grossly violated when it is viewed through "political lens" giving it political colour that tends to be harmful for any democracy and cautioned against such 'selective' interpretation.

"In recent years, some people have started interpreting human rights in their own way, looking at their own interests. They try to dent the image of our country in the name of human rights. While they see human rights violation in one incident they do not see violation in another. This kind of mentality causes damage to human rights," the PM said while addressing the 28th National Human Rights Commission (NHRC) foundation programme virtually.

He said human rights are grossly violated when they are weighed on the scale of political profit and loss.

"This kind of selective behaviour is harmful for the democracy," said Modi.

The PM said in the last few years, various initiatives have been taken to remove the 'injustice' happening at different levels in different sections.

He said many sectors have been opened for women and it is being ensured that they can work with security round the clock and added that India has ensured 26 weeks of paid maternity leave for career women, a feat that even many developed nations could not achieve.

The PM also listed the measures taken by the government for transgender, children and nomadic and semi-nomadic communities.

Recalling the inspired performance of the para athletes in the recent Tokyo Paralympics, Modi said, "In the recent years laws have been enacted for the divyangjan.”

He further said, "India’s freedom movement and its history has been a great source of inspiration for human rights. As a nation, as a society we resisted injustice and atrocities, we fought for our rights for centuries. At a time when the whole world was engulfed in the violence of World War I, India suggested the path of 'rights and non-violence' to the whole world. Not only India but the whole world sees our Bapu as a symbol of human rights and human values”.

The PM said it is important to understand that human rights is not associated with rights only but is a subject of our duties too.

"Rights and duties are two tracks on which the journey of human development and human dignity takes place. Duties are equally important as rights and they should not be discussed separately as they complement each other," he added.

Union Home Minister Amit Shah, who also attended the foundation programme at Vigyan Bhawan here, in his address said, "NHRC has tried to become the voice of victims in every sector."

He said the Commission has solved 20 lakh cases in its 28 years of existence.