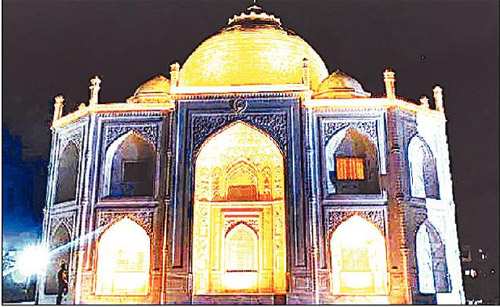 Chronicle Reporter, Bhopal/Burhanpur
Anand Prakash Chokse, the director of the school in Burhanpur, Madhya Pradesh, has built his house exactly like the Taj Mahal.
This 4-bedroom house, which was completed in 3 years, has been gifted by Chokse to his wife Manjusha. It has a big hall, 2 bedrooms downstairs and 2 bedrooms upstairs. Apart from this, there is also a kitchen, library and meditation room. The house has been awarded the Indian Construction Ultratech Outstanding Structure of Madhya Pradesh. The original Taj Mahal built in Agra was built by the Mughal ruler Shah Jahan for his wife Mumtaz. Mumtaz died in a palace in Burhanpur during the 14th delivery. Mumtaz's body was kept safe in Ahukhana, Burhanpur for 6 months. Shah Jahan first wanted to build the Taj Mahal on the banks of the Tapti river passing through Burhanpur, but due to some reasons he had to get it built in Agra instead of Burhanpur. Chaukse explains that he had a strong mind as to why the Taj Mahal could not be built in Burhanpur. That's why he decided to gift the Taj Mahal to his wife like Shah Jahan.
Many difficulties were faced in the construction of this house, but due to Anand's unwavering faith, success was achieved in building a house like Taj Mahal.
Praveen Chouksey, a consulting engineer who built a house like Taj Mahal, told that Anand Chouksey had asked him to build a house like Taj Mahal. It was a difficult task. Anand and his wife went to Agra to see the Taj Mahal. After returning, the engineers were asked to build a house similar to the Taj Mahal. After this, engineer Praveen Choukse also went to Agra and saw the Taj Mahal.