'I am hurt, why Govt is scared of naming willful defaulters?', asks Rahul after LS witnesses noisy scenes 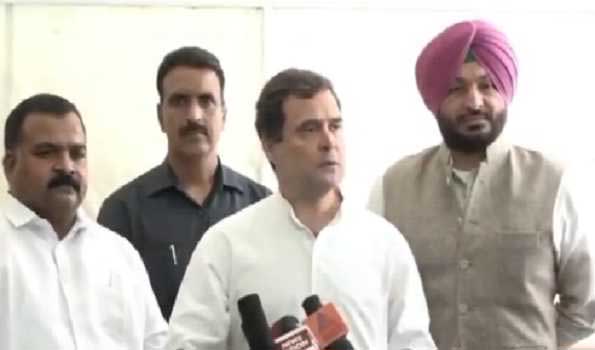 New Delhi, Stating that he is 'quite hurt' over the denial from asking a supplementary question in the Lok Sabha, former Congress president Rahul Gandhi on Monday asked why the Union government is so scared of naming 50 willful defaulters to the banks."There is a parliamentary procedure when asking questions. This is the right of every single Member of Parliament, when you ask a question, the Minister responds and then you are allowed to ask secondary question and sometimes you are allowed to ask another question after that. Today I asked a question. The Minister did not respond to my question. My question was how many people, what are the 50 largest defaulters in India. Minister did not answer my question and I was quite hurt", Mr Gandhi told reporters after the House witnessed a heated argument between the Treasury and Opposition benches over the banking system.The Congress leader said it was the duty of the Lok Sabha Speaker to protect his right to speak and it was his duty to allow him to ask a supplementary question.

"But I was not allowed to ask a supplementary question. This is taking away my right as a Member of Parliament and it is not fair. It is completely unfair", he added.
Earlier, at the question hour in the Lok Sabha, Mr Gandhi has asked a question to the Finance Minister to reveal the names of top 50 willful defaulters."The Indian economy is going through a very difficult period. Our banking system is practically not working anymore. Banks are failing. And I suspect more banks are going to fail as a result of the current global situation. The centre cause of the failure of these banks is the stealing of the money by large numbers of the people. I had asked the question that who are the top 50 willful defaulters. But the government did not give the answer", he said.Talking to reporters, Mr Gandhi further said that Prime Minister has said he is going to take action against the willful defaulters."Then why are they not putting the names on the table? I have been warning this country that the current situation of the banks, the current economic situation coupled with Coronavirus is going to result in a disaster. I keep repeating it, I keep repeating it", he added.He also said that "the actions like this (in Lok Sabha) do not help".Responding to Mr Gandhi's intervention, Minister of State for Finance Anurag Thakur has held the previous government responsible for the current state of the banking system saying the present Modi government has made a lot of improvement in it.