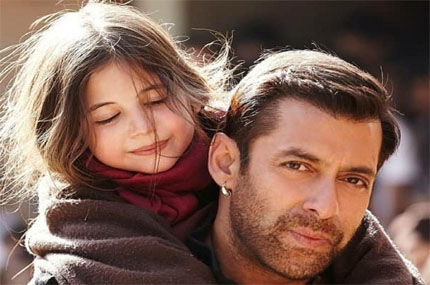 The Kabir Khan directed film has completed six years of release today. Till date, it's among the top five highest grossers at the domestic box office. Details about the sequel.
The Kabir Khan directed, Bajrangi Bhaijaan, fronted by Salman Khan and Kareena Kapoor, with Harshali Malhotra and Nawazuddin Siddiqui in key roles, has attained a cult status over the last six years. We recently interacted with writer, KV Vijayendra Prasad, who revealed that he is trying to crack a story for a sequel to Bajrangi Bhaijaan and he has discussed the same with Salman.
“I am trying to crack Bajrangi Bhaijaan 2. Sometime back, I told Salman the idea and he is also excited. But I am looking for a proper vehicle to carry it forward. I hope it materialises,” Vijayendra Prasad said. We were taken aback by the sudden update from the celebrated writer and hence, tried to verify it again with him. When asked if he has discussed the idea, he smiled, “When I met him casually, I told him about Bajrangi Bhaijaan sequel. He is excited with the thought and said it’s a good idea.”
What sets the response aside from the general comments made by writers and directors about sequels and franchise is the fact that the writer voluntarily gave an update on Bajrangi Bhaijaan 2. The author casually asked Vijayendra Prasad, if he is planning to write something for Salman again, and that’s when he made this revelation.
Talking of Bajrangi Bhaijaan, it is considered not just one of the finest films of Salman’s career, but also, among the best of Hindi cinema. The social drama was the second Hindi film after Aamir Khan starrer PK to collect over Rs 300 crore at the box-office in India, and till date, is among the top 5 grossers of Bollywood. The film has completed six years of release today. Vijayendra Prasad is meanwhile gearing up for the release of his next writing venture, RRR, directed by son, SS Rajamouli. In our interview, he also informed that he is working on a biopic of Mr. Ranjitsinh Disale. “I am writing his biopic. He is from Maharashtra and has been awarded the best teacher in the world. There’s also a film on Sita Ma in the works,” he concluded.