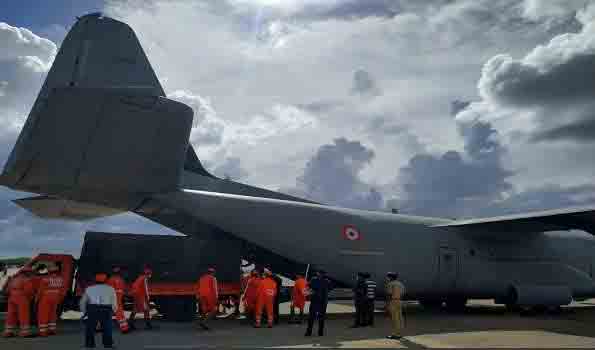 New Delhi, May 17 (UNI) The Indian Air Force (IAF) on Monday said that it had deployed 2 C-130J and 1 An-32 aircraft for transportation of 167 personnel and 16.5 tonnes of load of NDRF from Kolkata to Ahmedabad.
The An-32 is en route to Ahmedabad as of now, it added.
Another C-130J and two An-32 aircraft transported 121 NDRF personnel and 11.6 tonnes of load from Vijayawada to Ahmedabad for the same purpose, the Defence Ministry said in a statement.
Also, two C-130J airlifted 110 personnel and 15 tonnes of cargo for NDRF from Pune to Ahmedabad.
India Meteorological Department today said that the extremely severe cyclonic storm “Tauktae” over the east-central Arabian Sea moved north-northwestwards with a speed of about 15 kmph during the past 6 hours and lay centred at 0830 hrs on Monday over the east-central Arabian sea near latitude 18.8°N and longitude 71.5°E, about 150 km west of Mumbai, 220 km south-southeast of Diu, 260 km southeast of Veraval (Gujarat), and 490 km east-southeast of Karachi (Pakistan).
It is very likely to move north-northwestwards and reach Gujarat coast in the evening hours today & cross Gujarat coast between Porbandar & Mahuva (Bhavnagar district) from 2000 – 2300 hrs tonight with a maximum sustained wind speed 155-165 kmph gusting to 185 kmph, it said in a bulletin.