IAF chopper with CDS onboard crashes in Tamil Nadu 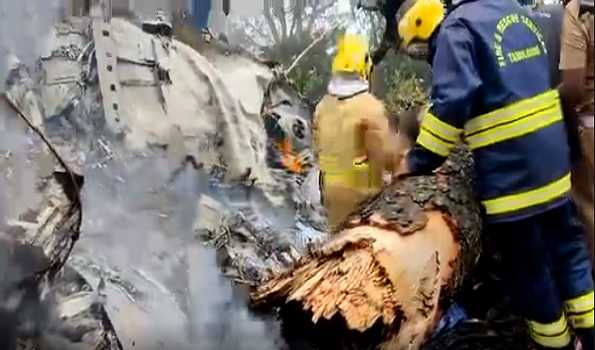 New Delhi, Dec 8 (UNI) A chopper of the Indian Air Force carrying Chief of Defence Staff General Bipin Rawat, his wife and several top Army officials crashed near Coonoor in Tamil Nadu. The fate of the CDS remains uncertain as images of the crashed chopper showed everything charred at the site.

Defence Minister Rajnath Singh briefed Prime Minister Narendra Modi on the development. Singh's statement in the Parliament on the crash was also awaited. He chaired a meeting of key defence officials.

Tamil Nadu Chief Minister MK Stalin, who spoke to higher officials and the Nilgiris District Collector, is air dashing to Coimbatore and will visit the crash site in the evening.

He also directed the district administration to provide the best of treatment to the injured and speed up rescue and relief works at the accident spot.

Tamil Nadu DGP C Sylendra Babu is also on his way to Coimbatore to oversee the relief and rescue operations.

A 15 member special team from Indian Army is rushing to Coonoor to speed up the relief and rescue works.

Special medial teams from Coimbatore hospitals have also been sent to Coonoor for providing treatment to the injured.

The Indian Air Force confirmed the accident, while officials said details were awaited about the fate of those onboard.

"An IAF Mi-17V5 helicopter, with CDS Gen Bipin Rawat on board, met with an accident today near Coonoor, Tamil Nadu. An Inquiry has been ordered to ascertain the cause of the cause," IAF said in a statement.

The chopper crashed in the Nilgiris, shortly after it took off from the army base in Sulur in Coimbatore.

Reports said the helicopter crashed in the Kaatteri hilly area. It exploded soon after it took off from Sulur Air Base.

Sources said four bodies, which were charred beyond recognition, were recovered from the spot.

Three officers, who sustained serious injuries and burns, were shifted to a hospital.

The helicopter crashed in Nilgiris district of Tamil Nadu was heading to Wellington from Sulur. The scheduled 15-minute ride crashed just ahead of landing.

Defence sources said 14 people were in the helicopter when it exploded. So far four bodies recovered were charred beyond recognition and awaiting identification.

Three officers, who sustained serious injuries and burns, were shifted to a hospital, and their condition was stated to be critical.

The fate of the remaining seven people, including Gen Rawat and his wife was being ascertained.

Rescue and relief operations were underway at the crash site.