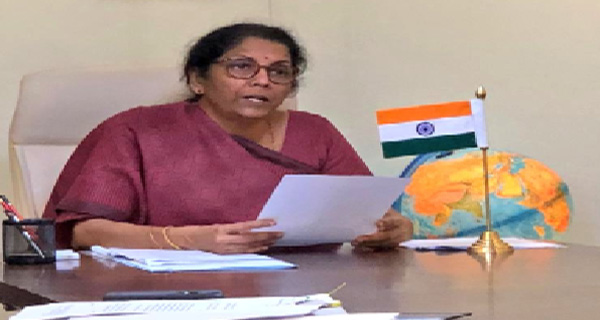 Union Finance Minister Nirmala Sitharaman on Tuesday suggested that IMF can develop innovative and ingenious methods to meet COVID-19 related financing requirements given that policy space is severely constrained in most countries in these unprecedented circumstances.

Ms Sitharaman participated in the 2nd Extraordinary G20 Finance Ministers and Central Bank Governors (FMCBG) meeting under the Saudi Arabian Presidency to discuss the impact of COVID-19 pandemic on the global economy and coordinate efforts in response to this global challenge.

On the issue of swap arrangements, Ms Sitharaman encouraged IMF to use its existing resources to create a non-stigmatised short-term liquidity swap facility which could be rapidly deployed as and when needed by the countries.

She also emphasised upon the need to allow flexibility for countries to engage in new lines of bilateral swap arrangements as per requirements.

During her intervention, Ms Sitharaman also briefly shared with her G20 counterparts the efforts being made by Government of India to deal with COVID-19 crisis, including the recently announced relief package of Rs 1.7 Trillion for the poor, the emergency health fund of Rs 150 Billion, along with several other monetary, fiscal and regulatory measures taken to address the economic and social concerns of those most impacted by the crisis.

The Finance Minister appreciated the Saudi Presidency for organizing these meetings which provide opportunity to all G20 members to not only share their individual experiences but also to work in better coordination.

G20 Finance Ministers and Central Bank Governors during the first Extraordinary Virtual G20 FMCBG Meeting held on March 23 had decided to meet virtually on a regular basis to continue discussions on the evolution of the COVID-19 pandemic, including its impact on markets and economic conditions and take further actions to support the economy during and after this phase.

During the summit, the Leaders had tasked G20 Finance Ministers and Central Bank Governors to deliver a G20 Action Plan in Response to COVID-19, in close cooperation with relevant international organizations (IOs).

Ms Sitaraman supported the proposed G20 Action Plan and emphasized that such an exercise would provide an opportunity for immense cross learning and critical insights. Referring to the G20 Leaders statement, regarding regulatory and supervisory measures, she emphasised the importance of ensuring that the financial system continues to support and quickly revive the economy

Finance Minister made specific interventions on reviewing and enhancing the IMF toolkit and further expanding the swap line network.