If Jyotiraditya was cannon then why he lost in his constituency: Kamal Nath 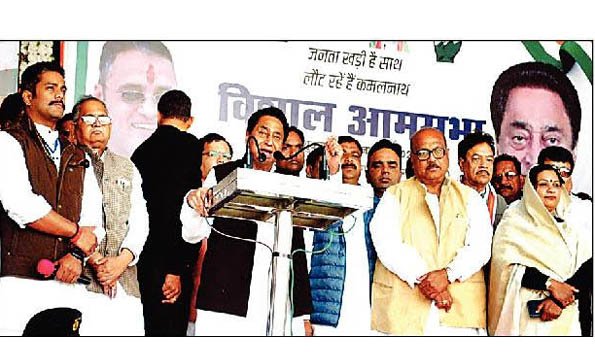 Chronicle Reporter, Tikamgarh
Former Madhya Pradesh Chief Minister Kamal Nath has once again targeted Union Minister Jyotiraditya Scindia. He said, now we do not need any Scindia. He is not a cannon.
If he was the cannon then why would he lose election of mayor in Gwalior and Morena? Kamal Nath had reached Tikamgarh on Friday in view of preparations for the assembly elections. He advised Congress leaders and workers to unite here. Former Chief Minister of Madhya Pradesh Kamal Nath is having one-to-one discussion with Congress workers and office bearers in Tikamgarh. During his stay, he told the media that this time the local candidate will be given importance in the coming assembly elections. Bundelkhand is backward even from tribal dominated areas. That's why there is a lot of need for development here. The farmer is upset here. There is no water available for irrigation. Drinking water is not available. People are migrating.
= Our competition with BJP organization
Kamal Nath said, we are competing with the organization of the BJP, so we have to strengthen the organization of the Congress. Now there is no election like before. The definition of election has changed. I also have to bring change, so I am having one-to-one discussions with party workers. Now I do not need Scindia. Scindia is not a cannon. If he was the cannons then why would they lose election of mayor Gwalior and Morena?