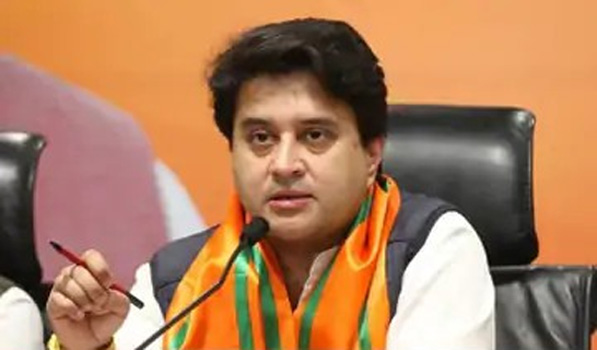 Makes strategy by staying in zone for three days
There will be a gathering of big leaders today also
Enters active mode
Chronicle Reporter, Bhopal
Harish Dubey
Chronicle Reporter, Gwalior
BJP is in full active mode regarding civic elections. First Madhavrao Scindia and after that Jyotiraditya Scindia generally did not play much role in the local body election campaign.
While remaining in the Congress, the role of the head of the Scindia family was limited to the selection of candidates for the post of mayor and Municipality Chairman, but this time, Scindia has focused only on all the wards of Gwalior. The BJP has a tradition of fixing the responsibility of each senior functionary, which is why being a home constituency, the party has given Scindia a lot of responsibility regarding the local body elections. Scindia was staying in Gwalior zone for the last three days. During this tour, he met party leaders, workers in Gwalior, Shivpuri and Guna and asked them to mobilize full force in the preparations for the civic elections and ensure the victory of the BJP. He also interacted directly with the workers in Shivpuri. Scindia is coming to Gwalior again today. In this tour, many ministers of the state government including Chief Minister Shivraj Singh and Union Minister Narendra Singh Tomar will also accompany him. A program of Scindia's stay in Gwalior is also being made for May 27. According to sources, due to the civic elections, the programs of Scindia's stay in Gwalior will continue in the month of June also. Union Minister Narendra Singh Tomar has also focused on Gwalior Chambal regarding the civic elections.
Election in-charge camped
After becoming the election in-charge of the Gwalior metropolis and rural of the Bharatiya Janata Party, Surjit Singh Chauhan, the municipal election in-charge, who came for the first time, was busy on Friday. As soon as he came to Gwalior, he got busy in sittings and meetings with the officials who took responsibility in the civic elections. The workers were seen trying to increase their impression by giving him a grand welcome at the railway station.