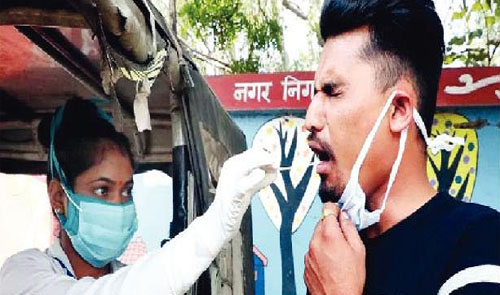 Chronicle Reporter, Bhopal
The number of Covid patients is increasing rapidly in the capital Bhopal. It has now started getting more than a thousand patients. Experts are considering it as the third wave. However, the peak of the third wave is still to arrive. It is a matter of concern that the positivity rate in the capital has increased to more than 12 percent, whereas during the second wave it was only 10 percent. Children were less infected.
Children getting infected due to parents' mistake
In Bhopal, 274 children have become corona positive in the third wave. Experts say that young children do not get infected directly, they get the infection from parents or family. Children are falling prey to the fault of their parents.
95% oxygen and 99% ICU beds vacant
It is a matter of relief that compared to the second wave, this time 95 percent oxygen beds and 99 percent ICU beds in the city are vacant. During the peak period of the second wave, 824 cases had come on April 11, the positivity rate was only 10 percent. The positivity rate became 12.5 on Friday. Dr. Parag Sharma says that the current situation is under control, the patients are not getting serious. The situation has not deteriorated much now, but now the patients of pneumonia are increasing. If we do not take precautions now, then the situation will not take long to worsen. Covid rules have to be followed, the only way is to protect self from infection.
95 percent patients of the state are in home quarantine
The havoc of Corona has started from January. Active cases have increased 40 times in the last 14 days. More than three and a half thousand new cases are being detected daily. The number of people recovering is only within 500. That is, more than two and a half thousand are increasing daily in active cases. Of this, 95 percent of infected are home quarantined. Till last month, about 50 thousand samples were taken. From this month the number of samples has been increased to 80 thousand.