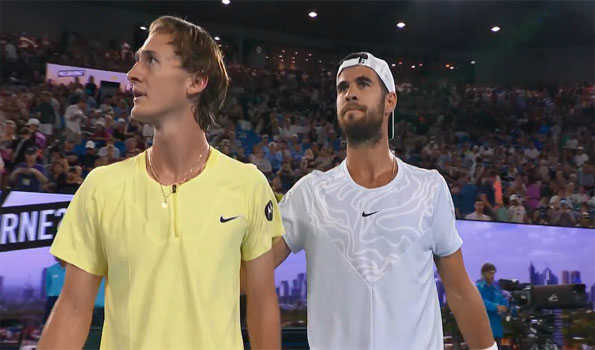 Melbourne, Jan 24 (UNI) A rejuvenated Karen Khachanov will contest his second straight Grand Slam semifinal after taking charge early before Sebastian Korda’s retirement with a wrist injury at the Australian Open on Tuesday.

“I think I kind of reinvented myself. I would say I always believe in myself but there are always ups and downs and sometimes when you have those great results it just shows you what you are capable of and then you start to believe more and more,” Khachanov said.

“So, this belief and self-confidence, I think, is much stronger after the US Open. I made it here to the semifinals, so I just hope to continue that way and to grow as a person and a sportsman.”

In a tussle between the 198cm (6’6”) Khachanov and the 196cm (6’5”) Korda, it was imperative both kept their big-hitting opponent on the move and stretched beyond their comfort zone.

Under the roof, it was 18th seed Khachanov who managed to do so from the off.

He cantered to 3-0 in just 10 minutes and showed great wheels to scramble for a well-placed drop shot and then punched the volley clear for 4-1.

Khachanov’s only loose game of the set came when serving at 5-3 and his woes were only compounded when Korda peppered the baseline to level.

Deep into the tiebreak, two set points went awry – one on a 27-shot rally – before Khachanov ended a bruising exchange on a laser- accurate backhand down the line.

It was a worrying omen for Korda.

Khachanov was victorious in 19 of his past 20 Grand Slam matches if he won the first set, with Kei Nishikori the only man to buck that trend, at Roland Garros in 2021.

With games on serve through the first five games of the second set, Korda’s hopes were further dented when he called for treatment on his right wrist at 2-3.

It was all one-way traffic when a second break on Khachanov’s sixth forehand winner secured a two-set advantage after 99 minutes before Korda’s charge was over three games later.

Having made the semifinals at the US Open last year, prior to this campaign, Khachanov had never passed the third round at Melbourne Park in six attempts, AO reported.

The 26-year-old has earned a shot at either third seed Stefanos Tsitsipas or Czech surprise Jiri Lehecka for his first Grand Slam final.

“For sure back-to-back semifinals in the Grand Slams feels great,” he said. “Obviously not the way you want to finish the match, but I think until a certain point it was very competitive, a very good battle.

“I'm feeling good to be honest. Really happy about my level, about the way I compete and looking forward to semifinals here in Australia for the first time.”